IRIN/Phoebe Greenwood
Bedouin children wander away from their home in al-Hadidiya village in the West Bank, which is now within a closed military zone claimed by the Israeli army.

28 May 2013
The transfer of Palestine Bedouin families to an urban location has deprived them of social cohesion and is destroying their traditional economic base, according to a, unprecedented United Nations-backed study released today.

The transfer of Palestine Bedouin families to an urban location has deprived them of social cohesion and is destroying their traditional economic base, according to a, unprecedented United Nations-backed study released today.

The joint study, the first of its kind on the issue, was compiled by the United Nations Relief and Works Agency for Palestine Refugees in the Near East (UNRWA) and an Israeli non-profit organization, Bimkom.

It analyzes the transfer against their will of 150 Palestine refugee Bedouin families to Al Jabal village starting in 1997 to expand the Israeli Ma’ale Adummim settlement outside of Jerusalem, stating that their situation has become socially and economically “nonviable.”

The launch of the study comes as Israeli authorities plan to relocate all remaining rural refugee Bedouin communities from the areas around Jerusalem to a second location, UNRWA says in a news release. If authorities move forward with the plans, the number of displaced people would be four times higher than those relocated to Al Jabal.

According to UNRWA Spokesperson, Chris Gunness, “the Israeli authorities are currently considering plans to create a second centralized Bedouin village in the occupied West Bank. However the stark conclusions of this report may lead to a reassessment of this policy.”

UNRWA added that it remains “concerned” that more than six decades after they were first displaced from their homes, Palestine refugees continue to face the threat of displacement and loss of livelihood.

In the UNRWA-Bimkom report, authors contend that the type of urban planning developed by the Israeli authorities for Al Jabal is “not an appropriate solution.”

The authors stressed that the allocation of a small parcel for each family and the connection to minimal infrastructure “can lead to significant harm to human rights.”

In addition, the joint study notes that Al Jabal is located next to the largest rubbish dump in the West Bank where 700 tonnes of waste are disposed of daily. The waste creates “high levels of toxic gases which pose an immediate health threat to residents, but also cause internal and surface combustion” which can lead to explosions, fires and other safety hazards.

In addition, the site is home to high numbers of pests thriving off the site and its surroundings include rats, packs of dogs, cockroaches and flies, “all of which pose significant health threats to livestock, the young and those of less robust health.”

The authors urged an appropriate plan to take into account socio-cultural aspects, provide subsistence and development opportunities, be developed with the villagers themselves and must be acceptable to them.

The study also noted that the Ma’ale Adummim settlement, “like all settlements is illegal under international law.”

In a UN Radio interview, Dawn Chatty, Professor at the Refugee Studies Centre at Oxford, who participated in the today’s launch, called the study “extraordinarily important” and “timely” given the health risks, as well as the social and economic degradation facing the Bedouin families.

“I hope that after today’s launch […], the report will be read very carefully,” Ms. Chatty said, underscoring her belief that the transfer of the Bedouin families was completely “unacceptable.” “Any other attempt to create another settlement similar to that, even if not on a garbage dump, would be a very serious mistake.” 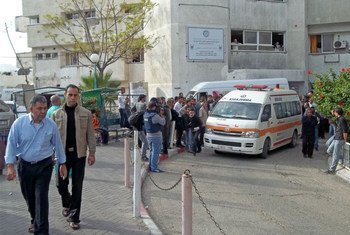 21 May 2013
Health programmes carried out by the United Nations agency tasked with assisting Palestinian refugees has helped to improve their lives, but greater efforts and more resources are needed to effectively tackle health challenges, particularly during times of conflict, says a new report.