Georgette Gagnon's resume reads like a who's who of the globe's most prominent danger zones. With past experience in hot-spots in Africa, as well as in Bosnia and Syria, the Canadian-born Director of the United Nations Assistance Mission in Afghanistan's (UNAMA) Human Rights Unit is now leading the effort to raise the bar on respect for human rights in the South Asian country.

“The human rights situation here is fraught with challenges,” she told the UN News Centre in a recent telephone interview, raising concerns ranging from the continuing armed conflict to violence against women.

Ms. Gagnon, who is also the Country Representative for the UN High Commissioner for Human Rights, faces a daunting task in bringing human rights issues up to speed in a country dealing with the challenges stemming from decades of conflict.

“The challenge has been attempting to document very clearly and accurately what the situation is for the Afghan people; what types of human rights violations they are experiencing,” she said. “And then taking that to the Government and international partners and working with them on agreeing to different kinds of recommendations and solutions and then trying to implement them.”

Among the most pervasive and serious human rights violations that Ms. Gagnon and her team regularly confront are issues relating to women and, in particular, violence against women.

Despite a 2009 Elimination of Violence Against Women law, which criminalized many harmful practices, including domestic violence, as well as forced and child marriage, she pointed out that gender-based violence still remains “very well entrenched in the culture and society.”

With the law in place, the UNAMA human rights officers monitor its implementation by the police, judges, prosecutors and other Afghan institutions, and whether it is leading to a reduction in the level of violence women experience. Their work also involves documenting claims made by civilians about human rights violations committed against them by combatants in volatile areas of the country.

Georgette Gagnon, temporary with the UN in Syria (UNSMIS), interviews families from the towns of Ltamneh and Kafer Zaita on 9 June following a Syrian government attack on the area. Photo: Austin Tice/Demotix

Georgette Gagnon visited the towns of Ltamneh and Kafer Zaita on 9 June, to assess the aftermath of a fierce battle that raged for five days. The photographer, Austin Tice, went missing near Damascus last August. Photo: Austin Tice/Demotix

As head of the human rights at the UN Assistance Mission in Afghanistan (UNAMA), Georgette Gagnon meets regularly with her staff and local communities in the regions. UN Photo

“A routine day for our human rights teams across the country is meeting a steady stream of people from the community who have been experiencing human rights abuses,” Ms. Gagnon said.

“We spend several days interviewing men, women and children who have been affected by or fled the conflict, some of them with just the clothes on their back,” she added. “And they tell us about how the fighting occurred, whether they had family members who were killed, whether a mortar landed in their yard, whether those detained experienced abuse.”

The result of much of this frontline, on-the-ground documentation and analysis ends up in UNAMA reports which seek to impact how the Afghan Government and allied international forces approach human rights issues in the country. Ms. Gagnon recalled that a decree issued by Afghanistan’s President, Hamid Karzai, against the use of torture in Afghan detention centres was consistent with the UN's own recommendations.

“In my experience, what I've seen in working with the UN, especially in Afghanistan, if it's done properly, is that UNAMA can get changes in policy and practice because the Government often acts on the UN's findings and recommendations,” Ms. Gagnon said.

At the same time, amid continuing conflict between Government forces and insurgents, the withdrawal of most international troops by the end of 2014 has raised the question over whether gains made in human rights protection can survive what may be a difficult period of transition.

Afghanistan is currently undergoing political and security transitions widely seen as crucial for the country’s future. The former includes the holding of a presidential election, slated for April next year, marking an end to the second term of the incumbent, President Karzai. The latter involves Afghan security forces taking over security responsibilities from their international allies, who are ending their combat mission in the country by the end of next year.

Ms. Gagnon is worried about a “possible disintegration” of the human rights situation following the withdrawal, which only highlights the key role of carried out by UNAMA’s human rights team.

“We're working with the Afghan security forces,” she said, “to put in place mitigation measures to protect civilians and ensure that the procedures, systems and the training are there to protect civilians, who often suffer the most from conflict-related violence.”

♦ Receive daily updates directly in your inbox - Subscribe here to a topic.
♦ Download the UN News app for your iOS or Android devices.
Afghanistan|peacekeep 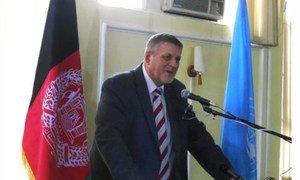 Senior United Nations officials in Afghanistan are today urging the Government to fully implement legislation to protect women from child marriage and other forms of violence, in line with international commitments, after the Afghan Parliament failed to ratify the law over the weekend.