ICTY
Courtroom 1 of the International Criminal Tribunal for the former Yugoslavia (ICTY).
25 May 2013

Members of the Security Council on Saturday marked the 20th anniversary of the United Nations tribunal set up in the wake of the Balkan conflicts of the 1990s, recognizing the Hague-based body's commitment to the fight against impunity for perpetrators of war crimes.

In a statement issued to the press, the Council recalled its resolution 827 of 25 May 1993, by which it unanimously established the International Criminal Tribunal for the former Yugoslavia (ICTY).

“The members of the Security Council also note this year marks [the Tribunal's] twentieth anniversary,” the statement says, adding that they recognize the contribution of the ICTY in the fight against impunity for “the most serious crimes of concern to the international community.”

Council members also welcome the forthcoming start on 1 July of operations of the branch of the International Residual Mechanism for Criminal Tribunals that is located in The Hague.

Through the statement, the Council members emphasize that the establishment of the Residual Mechanism was essential to ensure that the closure of the International Criminal Tribunal for Rwanda (ICTR) and the ICTY “does not leave the door open to impunity for the remaining fugitives and for those whose appeals have not been completed.”

They also reaffirm their strong commitment to the fight against impunity.

The ICTY is tasked by the Council with trying those responsible for the worst war crimes and other breaches of international humanitarian law committed during the various conflicts in the former Yugoslavia in the 1990s. Since its inception 19 years ago, the tribunal has indicted 161 persons.

Set up by the Council in December 2010, the Residual Mechanism is mandated to take over and finish the remaining tasks of both tribunals once their mandates expire. The Council has urged the two tribunals to conclude their work by the end of 2014.

♦ Receive daily updates directly in your inbox - Subscribe here to a topic.
♦ Download the UN News app for your iOS or Android devices.
tribunal 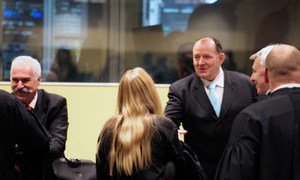 Two former high-level Bosnian Serb officials were sentenced today to 22 years imprisonment by a United Nations tribunal, for crimes against humanity and war crimes committed in Bosnia and Herzegovina in 1992.