22 May 2013
Experts from the United Nations International Atomic Energy Agency (IAEA) are heading to Japan to launch an emergency preparedness and response centre in Fukushima, the coastal city devastated two years ago when a massive earthquake and tsunami set off meltdowns at a nuclear power plant.

The IAEA, supported by the Government of Japan, will designate a new Response and Assistance Network (RANET) Capacity Building Centre in Fukushima next week, according to a news release from the UN nuclear watchdog.

The Centre will be home to several IAEA activities aimed at enhancing emergency preparedness and response capacity, both in Japan and worldwide, in light of the Fukushima Daiichi Nuclear power plant accident.

In March 2011, Japan was struck by a 9.0-magnitude earthquake and forceful tsunami that killed more than 20,000 people in the eastern part of the country. The tsunami also slammed into the Fukushima Daiichi nuclear power station, disabling cooling systems and leading to fuel meltdowns in three of the six units. The incident was reported to be the worst nuclear accident since the 1986 Chernobyl disaster.

Briefing the IAEA Board of Governors in Vienna two months ago, Yukiya Amano, the Agency’s Director General, said it had been a challenging two years, especially for the people and Government of Japan, but also for the IAEA. “However, the worst elements of the accident are behind us and we are now in the post-accident phase.”

The Centre’s first activity, an IAEA RANET workshop, will start the following day, and conclude on 31 May. About 40 experts from 18 countries will participate in the workshop, which will involve a field exercise in Fukushima Prefecture, according to the Agency’s news release.

Through RANET, the IAEA can mobilize the expert support and equipment to facilitate the provision of international assistance by request under the Convention on Assistance in the Case of a Nuclear Accident or Radiological Emergency. 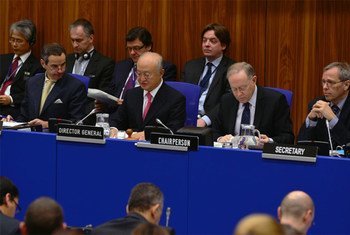 4 March 2013
The United Nations is working hard to help Japan deal with the consequences of the March 2011 nuclear power plant accident, the head of the International Atomic Energy Agency (IAEA) said today, as he presented a report in which he also voiced concern about issues relating to Iran and the Democratic People’s Republic of Korea (DPRK).