On World Day, UN encourages joining ‘do one thing for diversity and inclusion’ campaign

On World Day, UN encourages joining ‘do one thing for diversity and inclusion’ campaign

21 May 2013
Visit a museum, watch a foreign film or share your traditions with someone else, the United Nations is today encouraging people to ‘do one thing’ to mark the World Day for Cultural Diversity for Dialogue and Development.

“Culture, in all its diversity, can foster a sense of identity and cohesion for societies at a time of uncertainty. It is also a powerful source of creativity and innovation. No development can be sustainable without it,” said Irina Bokova, Director-General of the UN Educational, Scientific and Cultural Organization’s (UNESCO) said in her annul message.

“Recognizing and supporting cultural diversity can help to address both the economic and human rights dimensions of poverty and provide creative, cross-cutting solutions to complex issues - from health and the environment to advancing gender equality and education for all,” Ms. Bokova urged.

The UN Alliance of Civilization, in partnership with UNESCO and a coalition of partners ranging from corporations to civil society, encouraged people to join the UN campaign, “People all around the world will be doing one thing to express their commitment to diversity and inclusion, sharing their experience with family, friends and colleagues.”

The Day, proclaimed by the UN General Assembly in December 2002 and celebrated annually on 21 May, provides an opportunity for mobilization on the part of governments, policy makers, civil society organizations, communities and cultural professionals to promote culture in its diversity and in all its forms, according to the UNESCO website.

Special attention is given to national cultural policies that recognize the contribution of traditional knowledge, particularly when it to comes to protection of the environment and management of natural resources.

In New York, the UN High Representative for the Alliance of Civilizations, Nassir Abdulaziz Al-Nasser met with local communities in the fields of sports, education and faith in iconic venues such as the Yankees Stadium.

Meanwhile, the head of the UN mission in Iraq today called on residents to embrace diversity and engage in dialogue to build bridges between communities and lay the foundation for peace.

Noting the innocent civilians caught up in violence, he said “divisions can be healed, through open dialogue that builds tolerance, mutual respect, and trust. All Iraqis, including the country’s leaders, must embrace their differences to build a new culture of peace.” 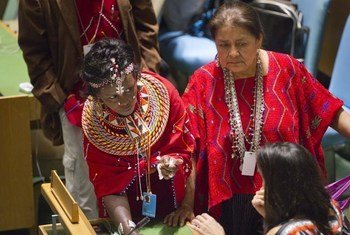 20 May 2013
Around 2,300 indigenous participants are expected to discuss culture, education and health during the 12th session of the United Nations Permanent Forum on Indigenous Issues, which will include a special focus on youth, indigenous groups in Africa and the importance of strengthening ties with international financial institutions.