Political leaders in Bosnia and Herzegovina are still falling short of the expectations of their citizens and the international community, causing the country to slip farther behind its neighbours in regional integration, the Security Council was today told.

“There can be no more excuses and there is no place to hide from their responsibilities. The choice is simple. They can succeed together or they can fail together,” said Valentin Inzko, High Representative for Bosnia and Herzegovina, calling on the political leaders to show the courage to finally reach the healthy compromises that will enable the country to progress.

Despite the strides Bosnia and Herzegovina had made in the past two decades, he told the Council during the 15-member body’s regular meeting on the situation in the country that the international community’s work was not yet done and its engagement remains essential.

Indeed, with Serbia and Kosovo making progress towards normalizing relations, Croatia now just seven weeks away from full European Union membership, and Montenegro also making “impressive” progress, he said: “The region is moving on, [while] lamentably, Bosnia and Herzegovina stagnates.”

“I want to make clear in no uncertain terms that the fundamental reason for the country continuing to lag behind its neighbours is the fact that elected officials and political parties continue to put their own narrow personal and party political interests before the interests of the citizens and the country at large,” he added.

The High Representative noted that in April, authorities failed to reach agreement to implement a key ruling of the European Court of Human Rights in the Sejdic and Finci v. Bosnia and Herzegovina case, which would unlock the next stage in the EU integration process.

Mr. Inzko also stated that authorities made “little concrete progress” to register military property in the name of the State, which in required for the process to enter into the North Atlantic Treaty Organization’s (NATO) Membership Actions Plan.

He also expressed concern about “a pattern of disregard for the rule of law in the county” which emerged in the last couple of years, particularly as political actors have “sidestepped, ignored or in some cases directly violated requirements set out in constitutions and laws for the sake of political expediency.”

Mr. Inzko went on to tell the Council that Bosnia and Herzegovina fortunately do not have the “immediate security dimensions of other issues you are dealing with,” but underscored that the progress made following the region’s wars in the 1990s is not yet done and will revert without continued engagement from the international community.

“The country is a country that in so many ways has come to symbolise our shared commitment and quest for an integrated European continent rooted in lasting peace, stability, prosperity and tolerance,” Mr. Inzko said.

He added that the European Union and NATO military missions in the country continue to reassure citizens that the country remains safe and secure despite the “difficult” political situation.

Herzegovina under their existing mandate is essential to support ongoing international community efforts and my ability to fulfil my civilian mandate,” Mr. Inzko said.

The Council is expected to take action in November on the mandate of the EU stabilization force (EUFOR), which assumed peacekeeping responsibilities in 2004 when it took over from a stabilization force led by NATO and is tasked with ensuring that all sides continue to comply with the 1995 Dayton Peace Agreement.

♦ Receive daily updates directly in your inbox - Subscribe here to a topic.
♦ Download the UN News app for your iOS or Android devices.
BOSNIA AND HERZEGOVINA 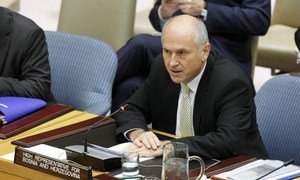 Political leaders in Bosnia and Herzegovina are failing to produce what they should be 17 years after the signing of the peace agreement that ended fighting in the country and secessionist rhetoric is on the rise, the Security Council heard today.