“Guatemala has made history by becoming the first country in the world to convict a former head of State for genocide in its own national court,” said UN High Commissioner for Human Rights, Navi Pillay, who added that the trial was of “monumental” national and global importance in the fight against impunity.

“I salute the victims, relatives and survivors whose courage and perseverance made this possible against all odds, as well as the lawyers, prosecutors and judges who carried out their duties under exceptionally difficult circumstances in the face of serious threats and intimidation.”

The Guatemalan court found that the crimes were committed in accordance with military plans intended to exterminate those who were considered “enemies,” which included not only guerrillas but also the civilian Ixil community that the authorities perceived to be supporting them.

The three-judge panel concluded that Mr. Ríos Montt had ordered the plans that led to the genocide, had full knowledge of the atrocities committed, and did nothing to stop them despite having the power to do so. In all, some 200,000 people – over 80 per cent of them of indigenous Mayan origin – were killed during the 36-year-long war, but the period of Ríos Montt’s rule is considered one of the bloodiest in the conflict.

“Despite all the obstacles, interruptions and numerous legal challenges which slowed down the trial, Guatemala has shown the world, and even more importantly its own people, that it is possible to address past crimes and bring justice,” Ms. Pillay said. “This historic verdict shows that no one is above the law, and that Guatemala’s institutions have the strength and solidity to carry this through – provided there is the will to do so.”

Ms. Pillay urged the Guatemalan authorities to continue to provide effective security for all those involved in the trial, including lawyers, prosecutors, victims, witnesses and human rights defenders. She also urged respect for the verdict and sentence and continued adherence to due process of law.

“Guatemala can now truly begin to heal the wounds of the past, as the suffering of so many people has been formally recognised,” she said. “Now the country has shown that justice for serious international crimes can – and should – take place anywhere and everywhere that they occur.

“This trial will bring encouragement to people all over the world struggling for justice for crimes committed thirty years ago, and for crimes being committed today. For this reason, the trial and conviction of Ríos Montt has been of monumental importance at the international as well as the national level.”

Most Guatemalans have yet to feel benefits of peace, UN mission reports 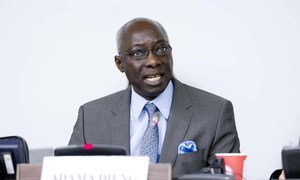 A senior United Nations official today urged judicial authorities in Guatemala to ensure that legal proceedings continue without interference against the country’s former head of State and former head of intelligence who stand accused of atrocities committed in the Central American nation over 30 years ago.