The United Nations counter-terrorism panel dealing with Al-Qaida strengthened its work and cooperation with related UN bodies to more urgently address the evolving threats posed by the network in Mali, the Sahel and Somalia, the chairmen of the group today told the UN Security Council.

During a briefing from the Council’s subsidiary bodies dealing with counter-terrorism and non-proliferation of weapons of mass destruction, Gary Quinlan, chairman of the Committee established pursuant to resolutions 1267 (1999) and 1989 (2011) on Al-Qaida, said that the Committee is making “every effort to ensure that the sanctions framework is as effective a tool as possible in preventing Al-Qaida and its affiliates from threatening international peace and security.”

These measures include making sure that the Al-Qaida Sanctions List is updated and as accurate as possible to facilitate the implementation of the sanctions measures. In February, the Committee officially delisted Osama Bin Laden and ensured that his frozen assets are not transferred to listed individuals or entities.

The Committee has also implemented a special agreement facilitating information exchange with INTERPOL which has improved the quality of information and enhanced the implementation of the sanctions measures via INTERPOL's special notice distribution system.

In the context of Mali and the Sahel, the Committee sanctioned the Mouvement pour l'Unification et le Jihad en Afrique de l'Ouest (MUJAO) and Ansar Eddine, entities closely linked to the Organisation of Al-Qaida in the Islamic Maghreb, as well as to the leaders of, and other individuals associated with, these groups.

Mr. Quinlan urged Member States to continue their support for the Committee and application of its measures, noting that “the Al-Qaida sanctions regime can only be as effective as the sum of its parts.”

Since his last briefing in November, Mr. Quinlan noted that “Al-Qaida affiliates in the Maghreb have waged a vicious insurgency in Mali, threatening the viability of that State and security in the region; Al-Qaida in the Arabian Peninsula continued to be a strong factor affecting the on-going security situation in Yemen; and Al Shabaab remained an ongoing threat to the security environment in Somalia.”

The Security Council also heard from Mohammed Loulichki, the chairman of the counter-terrorism committee, created pursuant to resolution 1373 (2001), who noted an upcoming special meeting focused on “enhancing cooperation and technical assistance to States in the Sahel region to strengthen their capacity in the global fight against terrorism.” The meeting is expected to be held in the last quarter of the year.

In addition, the Committee will hold a meeting on 24 May on “countering terrorism through the use of new communications and information technologies,” such as the internet and mobile phone.

Also addressing the Council was Kim Sook, chairman of the 1540 (2004) committee on WMD proliferation by non-State actors, who said he looked forward to closer cooperation with the two other committees and with Member States.

In a joint statement to the Security Council, the three committees said they plan to increase their cooperation while maintaining respect for the independence of their respective expert groups and mandate.

Among the areas of further cooperation, the committees plan to coordinate on common regional approaches to engage with Member States, increase engagement in on-site visits to Member States, and enhance coordination with the Counter-Terrorism Implementation Task Force (CTITF).

The CTITF was set up in 2005 and brings together two dozen UN entities, working under mandates from the General Assembly, the Security Council and various specialized agencies, funds and programmes.

♦ Receive daily updates directly in your inbox - Subscribe here to a topic.
♦ Download the UN News app for your iOS or Android devices.
sanctions 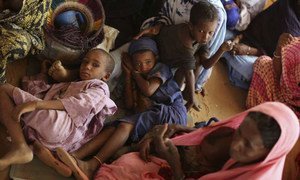 The top United Nations political official today reiterated the importance of the political process in Mali at a high-level meeting with senior UN and Government officials, while UN aid agencies urged more funding to assist the hundreds of thousands of Malians driven from their homes.