UNTV
An albino woman in Tanzania who was brutally attacked due to rumors about their magical powers which are having deadly consequences.

4 May 2013
A United Nations group of independent experts today drew attention to discrimination against persons with albinism in Tanzania, where they are the victims of ritual attacks and are routinely mistreated.

“They are regarded as ghosts and not human beings who can be wiped off the global map,” said the group in a message marking Tanzania's National Albinism Day. “People living with albinism [are] the target of many false and harmful myths in several countries, especially in the African region.”

Albinism is a rare, non-contagious, genetically inherited condition occurring in both genders regardless of ethnicity, in all countries of the world. It can happen to anyone if both father and mother carry the gene for it even if they do not have albinism themselves. Albinism results in a lack of pigmentation in the hair, skin and eyes, causing vulnerability to sun exposure and bright light.

In several African countries, it is believed that body parts of persons with albinism possess magical powers capable of bringing riches if used in potions produced by local witchdoctors. Some even believe that the witchcraft is more powerful if the victim screams during the amputation, so body parts are often cut from live victims.

Non-governmental organizations working in the field have documented 186 ritual attacks against people with albinism since 2000. Abductions and killings were recorded in 15 African states.

“These are manifestations of the worst forms of cruel, inhuman or degrading treatment and can never be justified,” the Special Rapporteur on torture, Juan E. Méndez, said. “Under international human rights law it is the duty of the State to afford protection to persons with albinism against such barbaric acts.”

People with albinism are not only brutally mutilated and tortured, but also killed and often buried alive together with tribal chiefs so as not to leave them in the grave alone. “These acts must be stopped and the perpetrators must be brought to justice without delay,” said Special Rapporteur on extrajudicial, summary or arbitrary executions, Christof Heyns.

“States bear full responsibility to undertake thorough, prompt and impartial investigations of all killings of persons with albinism, as well as to adopt the necessary measures to bring an end to impunity and prevent the recurrence of such killings,” he added.

People living with albinism is that they are often rejected and abandoned by their own families due to pressure from society, the UN Independent Expert on minority issues, Rita Izsák, noted.

“Their stigma, the lifelong social exclusion and general discrimination they face is a similar experience to those vulnerable racial minorities because of their different skin colour,” she said.

While numbers vary, in North America and Europe it is estimated that 1 in every 20,000 people have some form of albinism. In Tanzania, and throughout East Africa, albinism is much more prevalent, with estimates of 1 in 2,000 people being affected.

The Special Rapporteur on racism, Mutuma Ruteree underlined that Governments must ensure that persons living with albinism have the same opportunities as everyone else and that they are treated with the same dignity.

Almost all people with albinism are visually impaired. They may also have a shortened life span by lung disease or may develop life-threatening skin cancers. The Special Rapporteur on health, Anand Grover noted that they often do not receive the necessary health care, and urged authorities to assess their needs to increase their life chances.

Educating children about albinism is also important to prevent discrimination against them, said the Special Rapporteur on the right to educations, Kishore Singh. “There are now several educational methodologies and guides to teachers that have proved efficient in the course of educating children with albinism. These must be widely promoted and applied.”

The experts urged UN bodies such as Office of the High Commissioner for Human Rights (OHCHR) to study the root causes of discrimination and attacks on persons with albinism, and call on world governments to raise awareness and educate the public at large about the true nature of albinism.

“Dedicated national days, such as it exists in Tanzania can provide a great opportunity to trigger more attention to and launch discussion on the plight and needs of people living with albinism,” they said. “They are not ghosts; they are simply persons like you and us, but living with albinism.” 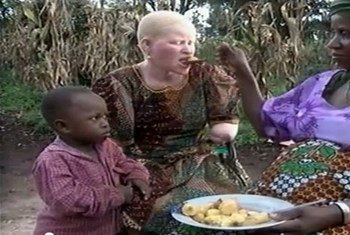 5 March 2013
The top United Nations human rights official today said she was appalled by reports of increased attacks against people with albinism in Tanzania, and called on the authorities there to take stronger measures to halt the crimes and to educate people against stereotypes, including the belief that body parts from albinos have magical qualities.