3 May 2013
Delegates from more than 160 countries have agreed on a set of climate change policy measures as part of an ongoing United Nations-led effort to create a new, universal climate accord by 2015 to limit global warming to 2 degrees Celsius (3.6 degrees Fahrenheit) from pre- industrial levels.

She said that the representatives also discussed how to construct a transparent, measurable, verifiable agreement that gets the best out of all countries. “And they are committed to sticking to their own timetable.”

The task of the UNFCCC's Ad Hoc Working Group on the Durban Platform for Enhanced Action (ADP) is to negotiate a new, universal climate agreement by 2015, to come into force from 2020, and to find ways to increase current inadequate global ambition to address human-generated climate change before 2020.

During this week of meetings, the second since annual high-level talks were held in Doha last year, Governments agreed that climate change needs to be addressed by all groups working together - from international organizations to the private sector - and with support from the highest political level, UNFCCC said in a news release.

Participants also agreed that there are many opportunities to scale up existing mitigation actions, notably with the help of renewable energy, and that there is a need to build up sufficient financial means to implement action, among other proposals.

The outcomes of this week’s meeting, and the next ADP meeting to be held in June, will be part of the agenda for the 19th Conference of the Parties to the UN Framework Convention on Climate Change (COP-19) this November in Warsaw, Poland.

The ADP co-chairs, Jayant Moreshver Mauskar and Harald Dovland, said in a joint statement that this week’s discussions “are making progress, but we have limited time… and therefore need to continue and accelerate our efforts.”

As representatives wrapped up in Bonn, the UN World Meteorological Organisation (WMO) confirmed that 2012 was the ninth warmest year on record.

The global average temperature in 2012 was 0.45 degrees Celsius higher than the 1961-1990 average of 14 degrees, according to WMO’s ‘Statement on the Status of the Global Climate’ released on 2 May. The statement also confirms that 2012 was the 27th consecutive year with an above-average global temperature.

“Although the rate of warming varies from year to year due to natural variability caused by the El Niño cycle, volcanic eruptions and other phenomena, the sustained warming of the lower atmosphere is a worrisome sign,” said WMO Secretary-General Michel Jarraud.

“The continued upward trend in atmospheric concentrations of greenhouse gases and the consequent increased radiative forcing of the Earth’s atmosphere confirm that the warming will continue,” he said.

The warming trend is responsible for record levels of ice thaw in the Arctic and extreme weather, including droughts and tropical cyclones, Mr. Jarraud said. “Natural climate variability has always resulted in such extremes, but the physical characteristics of extreme weather and climate events are being increasingly shaped by climate change,” he added.

Europe is warming faster than many other parts of the world, according to figures from the UN Office for Disaster Risk Reduction (UNISDR). According to a statement the office today released, southern and central Europe is seeing more frequent heat waves, forest fires and droughts. While the northern and north-eastern Europe is projected to get more precipitation and flooding.

In this context, the Special Representative of the Secretary-General for Disaster Risk Reduction and head of UNISDR, Margareta Wahlström, today welcomed the European Union’s newly announced strategy on adaptation to climate change.

“The adoption of this new strategy is a major incentive for European states to step up their efforts for disaster risk reduction and climate change adaptation,” Ms. Wahlström said in a news release from Geneva.

“Urban resilience is especially important across the region given that 75 per cent of the population live in urban areas which can be exposed to heat waves, flooding or rising sea levels.”

Ensuring environmental sustainability is one of the eight Millennium Development Goals (MDGs), anti-poverty targets world leaders have pledged to achieve by 2015. The UN General Assembly is scheduled to hold a thematic debate this month in New York to focus on climate change, green energy and sustainability.

In addition, Secretary-General Ban Ki-moon wants the world to reach universal access to modern energy services by 2030 as part of his Sustainable Energy for All Initiative. 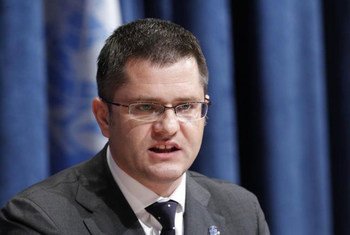 16 April 2013
The United Nations General Assembly is focused on achieving the Millennium Development Goals (MDGs) and fostering a successor development agenda, the President of the UN body said today, highlighting upcoming events to increase momentum as the 2015 deadline for both efforts approaches.