3 May 2013
Mary Robinson, Special Envoy for Africa’s Great Lakes Region, today urged leaders to keep working towards the success of the new eastern Democratic Republic of Congo (DRC) peace plan, particularly amid what she sensed were mounting pressure and rhetoric in the country.

“I am seeing a political will and an urgency for peace that has to be maintained,” Mrs. Robinson told reporters in the Burundian capital, Bujumbura, the latest stop on her trip to the Great Lakes region, which began on 29 April and wraps up this weekend.

“We have had regional agreements before. This time must be different. Now is the time for the implementation to begin,” she said, referring to the Peace Security and Cooperation Framework for the Democratic Republic of the Congo and the region.

Earlier in the day, she held talks with President Pierre Nkurunziza, and welcomed his expressed commitment to the peace plan and to working with her as Special Envoy. Mrs. Robinson also met with regional peace envoys of both the African Union and the International Conference on the Great Lakes Region, as well as with the leadership and staff of the UN Office in Burundi (BNUB).

“She recognizes the importance of regional efforts to contribute to solutions, and looks forward to working in partnership toward the success of the Framework agreement,” Mrs. Robinson’s office said afterwards.

Yesterday, Mrs. Robinson held talks with Ugandan President Yoweri Museveni focused on the implementation of the accord, which was signed by 11 nations in February 2013 to end the cycles of conflict and crisis in the eastern DRC and to build peace in the long-troubled region.

While in Uganda, she expressed concern about purported mounting pressure and rhetoric in recent days in the Democratic Republic of Congo (DRC).

“In her ongoing discussions with the leaders in the region, the Special Envoy is stressing that the political cooperation through the Framework should remain the central focus of efforts to resolve the conflicts and achieve peace, security and development,” continued the news release.

During talks with the Ugandan President, Mrs. Robinson commended Mr. Museveni for his efforts to contribute the peace efforts by hosting the ongoing Kampala talks under his leadership of the regional intergovernmental group known as the International Conference on the Great Lakes Region (ICGLR). She also met with Defence Minister Crispus Kiyonga, facilitator of the talks.

The Ugandan capital has been the site of on-off talks between the DRC Government and representatives of the 23 March Movement (M23) armed group, made up of former national army troops who mutinied in April and named after a 23 March 2009 peace agreement that they reportedly say has not been implemented.

The M23 occupied the eastern city of Goma on 19 November, after an advance that included clashes with the DRC armed forces, known by the French acronym FARDC.

Amid widespread condemnation and calls for their withdrawal, the group pulled out of the city of one million after 11 days in accordance with requirements laid out in an ICGLR communiqué, and monitored by some of the 1,500 peacekeepers from the UN Stabilization Mission in the DRC (MONUSCO) who are deployed in Goma.

In March, the UN Security Council authorized the deployment of an intervention brigade within MONUSCO to carry out targeted offensive operations, with or without the Congolese national army, against armed groups that threaten peace in eastern DRC.

In recent days, media reports have quoted the M23 saying they will not continue with the Kampala talks given the establishment of the intervention brigade.

During her visit, Mrs. Robinson urged all parties “to achieve renewed momentum” in the process. Her office added that the Special Envoy “recognizes the importance of regional efforts to contribute to solutions, and believes cooperation with the United Nations will be important to the success of the Framework agreement.”

In both Burundi and Uganda, Mrs. Robinson met with civil society organizations, including women's groups. The Special Envoy has said that the engagement of women at the national, regional and international levels is crucial for ensuring the success of the Framework.

Mrs. Robinson’s next talks are in South Africa, where she will hold meetings including in Pretoria on Saturday with Nkosazana Dlamini Zuma, the Chairperson of the African Union Commission. 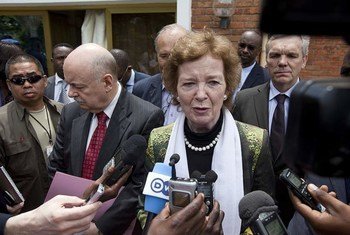 1 May 2013
A senior United Nations envoy visiting Rwanda today highlighted the importance of restoring trust among countries in the Great Lakes region to ensure long-term peace in the eastern Democratic Republic of the Congo (DRC) and beyond.