3 May 2013
A United Nations independent expert today urged the Mexican Government to strengthen the national structures that protect human rights, in particular the right to life, and reduce the involvement of the military in policing to reduce the use of force in the country.

A United Nations independent expert today urged the Mexican Government to strengthen the national structures that protect human rights, in particular the right to life, and reduce the involvement of the military in policing to reduce the use of force in the country.

“There seems to be wide agreement among various levels of Government and civil society that the long term solution to the problem of violence in Mexico lies in establishing a strong law enforcement system compliant with international standards surrounding the right to life,” the Special Rapporteur on extrajudicial, summary or arbitrary executions, Christoph Heyns, said at the end of a visit to the country.

“The need to achieve this goal as soon as possible should be the guiding star of all policy and other reforms.”

Mr. Heyns welcomed the announcement of a number of initiatives aimed at moving the country from relying on the military for internal security. Some of them are already in the process of implementation.

“The policies that have been announced should be fully implemented. The involvement of members of civil society in this process is crucial,” Mr. Heyns said. “There is no easy fix, but a slow and steady commitment to strengthening the role of the human rights framework in Mexico is the only long term solution.”

He emphasized the importance of decreasing the military’s involvement in policing, ensuring that civil courts and not military ones try members of the military who have been accused of human rights violations, and establishing clear standards on the use of force by law enforcement officials.

Mr. Heyns also drew special attention to the issue of ending impunity. “Each and every loss of life should be investigated with the same rigor. And each and every perpetrator should be apprehended and tried. Pursuing this objective will serve not only to decrease impunity, but to restore the value that society attaches to life,” he said.

The Mexican Government should also explore areas of cooperation with Central American countries, such as making genetic and fingerprinting databases available to each other, as well as sharing technologies and expertise to curb crime.

During his 11-day visit to Mexico, the human rights expert met with Government officials, judges, members of civil society and victims in Mexico City, and in the states of Chihuahua, Guerrero, and Nuevo Leon.

“The Mexican Government is highly engaged with the international human rights system, and the officials I met were very willing to discuss all the issues in a frank and open manner,” he said. “The international community is ready to work in partnership with Mexico to ensure a greater protection for the right to life – the precondition for the exercise of all other rights.” 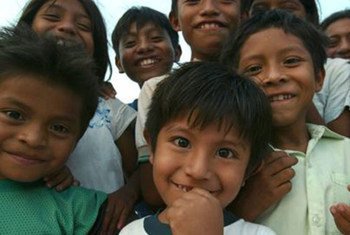 The majority of poor in Mexico are children – UN report

3 April 2013
More than 20 million children and adolescents in Mexico are estimated to live in poverty, and five million of them in extreme poverty, the United Nations Children’s Fund (UNICEF) today reported in a joint study with the Mexican Government.