Despite progress and innovation in key sectors of the United States’ economy, too many loopholes remain to adequately protect human rights from adverse business practices, a group of United Nations independent experts today warned.

While the US Government has committed to the UN Guiding Principles on Business and Human Rights, and established a number of relevant initiatives, “it is not facing the challenge of putting them into practice,” said Michael Addo, who along with Puvan Selvanathan, completed a 10-day mission to the US as representative members of the UN Working Group on business and human rights.

The Guiding Principles outline how States and businesses should implement the UN “Protect, Respect and Remedy” Framework to better manage business and human rights challenges.

The framework is based on three pillars – the State duty to protect against human rights abuses by third parties, including business, through appropriate policies, regulation, and adjudication; the corporate responsibility to respect human rights, which means avoiding infringing on the rights of others and to address adverse impacts that occur; and greater access by victims to effective remedy, both judicial and non-judicial.

From the low wage industries in the services sector, the UN experts met with Government officials, business leaders, civil society and UN organizations in Washington DC, as well as in Florida, California, West Virginia, New York and Arizona.

“The UN experts heard allegations of significant and widespread labour practices that, if correct, would be both illegal under US laws, as well as fall below international standards,” the Office of the UN High Commissioner for Human Rights (OHCHR) said in a news release.

During the visit, the UN experts noted the range of efforts at the federal, state and local levels, including promotion of better business practice through disclosure requirement, marshalling efforts against human trafficking, forced and child labour, and raising awareness of the Guiding Principles.

Among innovative approaches to address some of these gaps include greater collaboration between trade unions and companies in California and independently monitored mechanism to pay a living wage for tomato pickers in Florida.

“Despite innovative initiatives to address this problem, these seemed insufficient, and the legal and regulatory framework provides weak deterrents to illegal behaviour, too many loopholes to avoid compliance and little incentive for companies to behave responsibly, according to the allegations we heard,” Mr. Selvanathan said.

In West Virginia and the Navajo Nation, the Working Group reviewed issues related to indigenous people in the context of surface mining and noted in particular allegations in regards to “the lack of free, prior and informed consent for projects affecting them and sites of cultural and religious significance to them, as well as issues of discrimination,” according to today’s news release.

“With a few exceptions, most companies still struggle to understand the implications of the corporate responsibility to respect human rights. Those that do have policies in place, in turn face the challenge of turning such policies into effective practices,” Mr. Selvanathan said.

“Much more awareness-raising and education needs to take place,” Mr. Addo underscored. “Effective implementation of the Guiding Principles by companies requires first and foremost a good understanding of the processes involved, mobilization of significant buy-in and commitment from the top of a company.”

In their preliminary findings, Mr. Selvanathan and Mr. Addo stressed that they had no opinion about the deeply divided extracting industry, and were only interested in looking at how actual or potential adverse human rights impacts are identified, prevented, mitigated and addressed.

The Group noted, however, that it heard allegations of impacts on the environment, land and water, and on sites of cultural and religious significance to Native Americans.

Independent experts or special rapporteurs are appointed by the UN Human Rights Council to examine and report back, in an unpaid capacity, on specific human rights themes. The Working Group will present its report to the Geneva-based Council in June 2014. 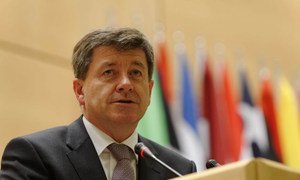 Approximately 2 million people die each year due to work-related diseases while 160 million more are afflicted by non-fatal occupational illnesses, says a new report by the United Nations labour agency, which has called for an “urgent and vigorous” global campaign to tackle the growing problem.