The Security Council today voted unanimously to establish the United Nations Assistance Mission in Somalia, to be known as UNSOM and to be based in the country’s capital, Mogadishu, beginning on 3 June for an initial period of 12 months.

Stressing the need for “effectively coordinated international support for Somalia’s Federal Government,” the Council structured the mandate of the new mission as follows: providing UN ‘good offices’ functions to support peace and reconciliation; assisting the Government and the existing African Union peacekeeping force known as AMISOM with advice on peacebuilding and State building; assisting in coordinating international support; helping build capacity in human rights and the rule of law; and monitoring and helping prevent human rights violations.

Noting that progress, the Council’s decision follows its adoption on 6 March of a resolution extending for another year the mandate AMISOM and partially lifting the 20-year arms embargo imposed on the country. By that text, it also agreed with Secretary-General Ban Ki-moon that the 15-year-old United Nations Political Mission in Somalia (UNPOS) had fulfilled its mandate and should “be dissolved and replaced by a new expanded special political mission as soon as possible.”

Secretary-General Ban followed-up by sending an assessment mission to Somalia and the region from 17 to 29 March, led by the Department of Political Affairs. According to a letter sent by Mr. Ban to the Council summing up the assessment, the core function of the new United Nations mission would be to act as an enabler, assisting the Federal Government of Somalia to create the political and strategic environment in which peacebuilding could proceed.

Critically, noting the Somali Government’s request a single “door to knock on”, the Secretary-General said in his letter that the new mission “will be a platform enabling coherent, integrated support to Somalia by the United Nations system, as well as a stronger strategic partnership and collaboration with AMISOM across all areas of peacebuilding”.

By the resolution adopted today, the Council decided that the new mission, UNSOM, will be headed by a Special Representative of the Secretary-General, and will be based in the capital, Mogadishu, with further deployment throughout the country as requested by the Government.

The resolution also says that “with immediate effect,” all appropriate activities of the United Nations Country Team should be fully coordinated with the head of the new mission. It also requests the Special Representative to “align closely” and coordinate the activities of UNSOM with those of the Somali Government, the African Union and the Intergovernmental Authority on Development (IGAD).

Beyond its focus on political matters, the Council also expresses concern at the ongoing humanitarian crisis in Somali and its impact on the people of the country. It commends the efforts of the United Nations humanitarian agencies and other relief organizations and aid workers in delivering life-saving assistance to vulnerable populations. 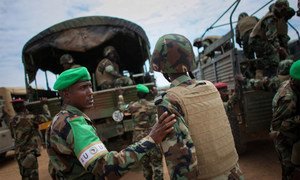 The Security Council today extended for another year the mandate of the African Union peacekeeping force in Somalia, as it continues to consider a revised United Nations presence there, and partially lifted the 20-year-old arms embargo imposed on the country.