United Nations officials today issued a call to action to ensure the safety of journalists in every country, echoing Secretary-General Ban Ki-moon who declared; “When it is safe to speak, the whole world benefits”.

“Every day, freedom of expression faces new threats. Because they help ensure transparency and accountability in public affairs, journalists are frequent targets of violence,” said Secretary-General Ban and Irina Bokova, Director-General of the UN Educational, Scientific and Cultural Organization (UNESCO), in a joint message for World Press Freedom Day, observed each year on 3 May.

“Too many media workers also suffer from intimidation, threats and violence. Too many experience arbitrary detention and torture, often without legal recourse. We must show resolve in the face of such insecurity and injustice.”

The UN General Assembly designated 3 May as World Press Freedom Day in 1993. This year’s theme, “Safe to Speak: Securing Freedom of Expression in All Media”, seeks to rally global action to protect the safety of all journalists worldwide and to break the vicious circle of impunity for crimes committed against them.

According to UNESCO, more than 600 journalists have been killed in the past decade, many while reporting in non-conflict situations. Impunity is also widespread as nine out of 10 cases of killings of journalists go unpunished.

Mr. Ban and Ms. Bokova emphasized that press freedom “does not happen automatically,” but requires the creation of a safe environment for dialogue, where they can execute their jobs without fear of reprisal.

They also noted that action must encompass both traditional media as well as digital mediums, where news is increasingly produced and consumed.

“Bloggers, citizen reporters and social media producers, as well as their sources, face increasing threats to their safety,” they said. “In addition to physical dangers, they are being targeted with psychological and emotional violence through cyber-attacks, data breaches, intimidation, undue surveillance and invasions of privacy.

“Such assaults not only limit the right to freedom of expression and threaten the safety of online journalists and their sources – they undermine the ability of all people to benefit from a free and open Internet.”

Mr. Ban and Ms. Bokova reiterated the UN’s strong commitment to coordinate action, raise awareness and support countries in upholding international principles and developing legislation for freedom of expression and information according to the UN Plan of Action on the Safety of Journalists and the Issue of Impunity.

“As we mark World Press Freedom Day, let us pledge to do our utmost to enable all journalists in all media to do their jobs,” Mr. Ban said in New York at an event organized by UNESCO and the Department of Public Information on journalists’ safety. “When it is safe to speak, the whole world benefits.”

Meanwhile, the UN Assistance Mission in Afghanistan (UNAMA) emphasized the importance of securing freedom of the press, as the country prepares for presidential elections in 2014.

“Amongst other checks and balances, a vibrant media, with vigorous debate and balanced coverage can help to a greater extent with the transparency and accountability necessary for true democratic participation,” said Ján Kubiš, the Special Representative of the Secretary-General for Afghanistan.

According to the Committee to Protect Journalists (CPJ), Afghanistan is one of the top ten countries where crimes against journalists go unpunished. Iraq, Somalia and the Philippines top the list.

In Iraq, authorities recently suspended the licences of 10 satellite channels because of a rise in sectarian unrest that has killed over 170 people in less than a week. Al-Jazeera TV and Sharqiya are among the channels accused of ‘inciting violence.’

“Freedom of expression and democracy belong together,” said Mr. Ban’s Special Representative in the country Martin Kobler. “One cannot exist without the other. Iraq cannot afford to take steps backward.

The United Nations notes that in Somalia, journalists risk not just death on a daily basis but also arbitrary arrests, as happened earlier this year when a reporter was accused of fabricating a rape story based on an interview which was never published.

In related activities, UNESCO is organizing a series of events in San José, Costa Rica, over three days, focusing on securing freedom of expression in all media. The events include an award ceremony for the winner of the UNESCO/Guillermo Cano World Press Freedom Prize, which this year will go to Ethiopian journalist Reeyot Alemu, who has written critical pieces on poverty and gender equality. She is currently serving a five-year sentence in prison.

UNESCO is also organizing a three-day festival in Rabat, Morocco, to mark the 20th anniversary of World Press Freedom Day. The festival includes conferences, training sessions for journalists, an art exhibit, and a movie screening, among other activities.

Freedom and safety of journalists must be ensured, declare top UN officials 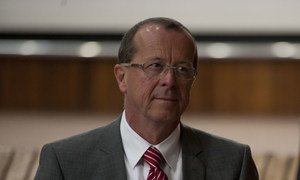 The United Nations today urged Iraq’s Communication and Media Commission to reconsider its decision to suspend the licenses of several television stations, while stressing the importance of ensuring press freedom in the country.