A senior United Nations envoy visiting Rwanda today highlighted the importance of restoring trust among countries in the Great Lakes region to ensure long-term peace in the eastern Democratic Republic of the Congo (DRC) and beyond.

“If we can bring about peace, which we must, and stop the armed groups of all kinds from operating in the eastern DRC, this will help Rwanda, it will help the region,” said Mary Robinson, the Secretary-General’s Special Envoy for Africa’s Great Lakes Region, in remarks to the press.

Her stop in the Rwandan capital, Kigali is part of a regional tour to encourage implementation of the accord she has called a “framework for hope,” which was signed by 11 countries in February aimed at ending decades of conflict and suffering in DRC and the wider region.

“I believe the real heart of this is to rebuild and strengthen the trust between the countries of the region by each of them implementing, rigorously and transparently, the commitments,” she said.

Mrs. Robinson explained that her role would not be “to come up with the solution to the conflicts” but rather to encourage ownership of the agreement and its implementation by the Governments and the people within each country who would be the beneficiaries.

While in Kigali, she spoke by telephone with President Paul Kagame who was travelling outside the country, and met with senior Government officials, as well as with civil society organizations.

Mrs. Robinson said she was encouraged by her conversations with Mr. Kagame and Foreign Minister Louise Mushikiwabo, who confirmed the Government’s commitment to work towards the implementation by all signatories of their commitments in the Peace, Security and Cooperation Framework for the DRC and the Region.

Last November the M23 rebel group – made up of former members of the DRC national army (FARDC) who mutinied in April 2012 – occupied Goma, in the eastern part of the country. Clashes between the Government and rebels displaced more than 130,000 people in and around the city, and sent another 47,000 fleeing to neighbouring South Kivu province. Amidst widespread condemnation and calls for their withdrawal, the M23 fighters pulled out after 11 days.

Mrs. Robinson’s next stop in her visit to the region will be Kampala, Uganda. She will then travel to Burundi, South Africa and Ethiopia. 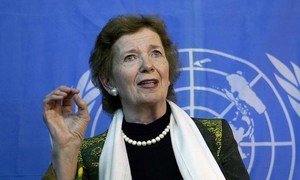 A senior United Nations envoy today stressed the need for peace, security and development in eastern Democratic Republic of the Congo (DRC), as she visited the provincial capital of Goma, the site of upheaval and a humanitarian crisis late last year.