The United Nations today kicked off celebrations for the second International Jazz Day, with a concert in Istanbul, along with other performances and educational programmes across the world highlighting the musical genre’s role as a powerful tool for peace, dialogue and cooperation.

The United Nations today kicked off celebrations for the second International Jazz Day, with a concert in Istanbul, along with other performances and educational programmes across the world highlighting the musical genre’s role as a powerful tool for peace, dialogue and cooperation.

“No musical art form is more powerful as a diplomatic tool than jazz,” said the Director-General of the UN Educational, Scientific and Cultural Organization (UNESCO) Irina Bokova in her message for the International Day, observed each year on 30 April.

“For over a century jazz – the universal language of passion and benevolence – has united people of disparate cultures, religions, and nationalities, fostered and strengthened communication and partnerships among heterogeneous groups,” she said, adding that jazz has also enhanced the peace-making process and demonstrated just how much all people have in common.

Born in the city of the United States city of New Orleans at the beginning of the 20th century, jazz is rooted in African traditions, draws from European musical forms, and has evolved into various styles across the globe.

International Jazz Day events, which are organized by UNESCO and the Thelonious Monk Institute of Jazz, seek to spotlight the historic influence the genre has had in connecting people and igniting social change.

“Jazz stands for freedom, symbolizes democracy, and has soothed and uplifted the spirits and souls of millions of people residing in all corners of the globe, particularly the disenfranchised citizens who otherwise would have great difficulty expressing and channelling their feelings, emotions and opinions,” Ms. Bokova said.

Concerts, conferences and discussions about jazz and its principles will be ongoing throughout the day, not just in Istanbul, but across all seven continents, as well as community events in schools, clubs, town squares and village centres, UNESCO said in a news release.

Turkey has an age-old tradition of jazz. In the 1930s, the country’s first ambassador to Washington, Munir Ertegun, opened his embassy’s parlours to African-American jazz musicians, who gathered there to play freely in a socio-historical context which was deeply divided by racial segregation at the time.

Inspired by this legacy, the ambassador’s sons, Ahmet and Nesuhi, went on to establish the United States’ first jazz and gospel label in 1947 – Atlantic Records – which was helped spread jazz music around the world.

This year also marks the beginning of the International Decade for People of African Descent, and UNESCO noted that the African continent would be doubly honoured, as jazz draws its origins from that region of the world.

♦ Receive daily updates directly in your inbox - Subscribe here to a topic.
♦ Download the UN News app for your iOS or Android devices.
education|peace 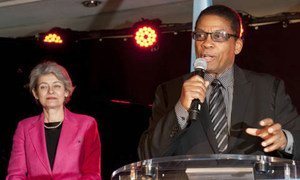 The Turkish city of Istanbul will be the global host city of the second International Jazz Day, the United Nations Educational, Scientific and Cultural Organization (UNESCO) and the Government of Turkey announced today.