30 April 2013
Increasing numbers of Palestinian refugees in Syria are being killed, injured or displaced amid the intensifying violence in the Middle Eastern country, a United Nations agency warned today as it appealed to all sides to resolve the conflict through dialogue and political negotiations.

According to the UN Relief and Works Agency for Palestine Refugees in the Near East (UNWRA), an estimated 235,000 Palestinians inside Syria have been displaced by the two-year conflict, with Palestinian refugee camps directly affected by the escalating violence.

In a statement released today, UNRWA confirmed the additional displacement of some 6,000 Palestinians from the Ein El Tal refugee camp, located 12 kilometres north of Syrian city of Aleppo, after armed groups overran the camp and declared it a military zone. Mortars and small arms were reportedly used in the assault, damaging numerous refugee homes and contributing to dozens of fatalities and injuries.

“Ein El Tal is the latest manifestation of a cycle of catastrophic violence in which the conduct of all parties has transformed Palestine refugee camps into theatres of conflict in which heavy weapons are used, resulting in severe suffering for Palestinian civilians,” the UNRWA news release stated.

“UNRWA’s response efforts are continuing amidst reports that significant numbers of the displaced refugees may be trapped without adequate shelter in rural areas around Aleppo where intense armed conflict continues to rage,” the UN agency continued.

In the wake of this latest incident, UNRWA reported that its Aleppo office was rolling out “rapid arrangements” to provide food and cash assistance to those displaced, adding that significant numbers of refugees from Ein El Tal may be trapped without adequate shelter in rural areas around Aleppo where intense armed conflict continues to rage.

As the fighting in Syria enters its third year, the Palestinian refugee population there has not been spared. Five Palestinian children were killed in early March when they were caught by incoming gunfire and shelling. The previous month, 12 Palestinian refugees were killed by heavy weaponry in the Damascus suburb of Yarmouk; five of them were members of the same family.

Following that incident, UNRWA cautioned that the Palestinian refugees were unable to move around safely and faced severe restrictions owing to escalating threats from shelling and armed clashes, exacerbating vulnerabilities that existed prior to the Syrian conflict.

According to statistics released by UNRWA earlier this year, most Palestinian refugees in Syria now rely on the Agency as their sole means of support. Several UNRWA schools in the country are currently acting as a last place of refuge for 9,000 people, while tens of thousands languish under harsh conditions in neighbouring countries. Moreover, some 20,000 people have fled to the over-crowded refugee camps of Lebanon.

The UN agency recalled that the events at Ein El Tal mirrored the “tragic experience” of other Palestinian refugee camps – Dera’a Camp, Yarmouk in Damascus City and Husseiniyeh, Khan Eshieh, Sbeineh, and Seida Zaynab Camps in the wider Damascus area – and urged all sides to the conflict to halt fighting in civilian areas.

“While continuing to respond to humanitarian crises affecting Palestinians in Syria, UNRWA condemns the conduct of armed conflict in civilian areas, and the failure of all parties to safeguard the safety and lives of Syrian and Palestinian civilians,” the agency stressed.

“UNRWA urgently appeals to all sides to halt the human suffering caused by the conflict in Syria, and to resolve their differences through dialogue and political negotiations.” 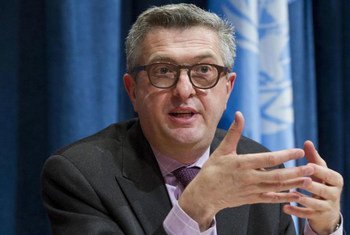 11 March 2013
Amid rising deaths among the Palestinian refugee population in Syria and funding shortfalls for humanitarian assistance in the war-torn country, a senior United Nations official today urged international donors to step up their financial support for relief efforts in what he described as “a messy, violent and tragic war for the civilian population.”