Secretary-General Ban Ki-moon condemned the terrorist attack earlier today in Damascus on the convoy of Syrian Prime Minister Wael al-Halqi that resulted in deaths and injuries.

Mr. al-Halqi has reportedly survived the attack, which took place in the western Mazzeh district of the capital.

The Secretary-General, in a statement issued by his spokesperson, expressed his deepest condolences to the families of the victims and wished those injured a speedy recovery.

“The Secretary-General has consistently condemned all acts of terrorism. The targeting of civilians and civilian objects by anyone is unacceptable.”

The statement added that Mr. Ban remains “extremely worried” at the escalation of violence in Syria, where civilians continue to be killed, injured, detained and abducted every day, including most recently the kidnapping of two prominent clerics in northern Syria.

“The Secretary-General has repeatedly stressed that all violence must end immediately, all sides in the Syrian conflict should move towards a political solution, and all should stop supplying weapons to any side in Syria.”

The UN estimates that there 6.8 million people in need as a result of the ongoing crisis in Syria, with 4.25 million people internally displaced and an additional 1.3 million seeking refuge in neighbouring countries. The conflict has killed over 70,000 people since efforts to oust President Bashar Al-Assad began in March 2011. 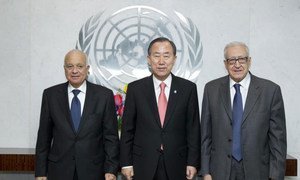 Secretary-General Ban Ki-moon and the Secretary-General of the League of Arab States, Nabil Elaraby, today met with their special representative Lakhdar Brahimi to discuss ways to help the Syrian parties begin a political process which could help end the violence while protecting all people and communities in the shattered country.