26 April 2013
The newly appointed United Nations Envoy for the Great Lakes Region of Africa is headed to the region this weekend for her first visit to bolster support for a recently agreed UN-mediated accord she has described as "a framework for hope" aimed at ending decades of conflict and instability in Democratic Republic of the Congo and the wider region.

Mary Robinson, Special Envoy of the Secretary-General for the Great Lakes will be in the region from 29 April to 5 May. She will kick off her visit in Kinshasa (29-30 April). After two days there, she will head to the capitals of Rwanda (1 May) and Uganda (2 May). Those stops will be followed by visits to Burundi (2-3 May), South Africa (3 May) and, finally, Ethiopia (4-5 May), where she were conclude her mission at African Union Headquarters in Addis Ababa.

Ms. Robinson, former President of Ireland and former UN High Commissioner for Human Rights, was appointed in March. The Organization has long supported efforts to bring peace and stability to Africa’s Great Lakes sub-region, which has been plagued by conflict, porous borders and humanitarian crisis, along with tensions over natural resources and other factors.

A key step in recent efforts was the adoption in February of the UN-brokered “Peace, Security and Cooperation Framework for the Democratic Republic of the Congo and the Region.” The 11 signatories are Angola, Burundi, Central African Republic, Democratic Republic of the Congo, Republic of Congo, Rwanda, South Africa, South Sudan, Uganda and Tanzania. The Special Envoy intends to visit the remainder of the signatory countries soon.

“This agreement represents an avenue of hope for the people of the region to build stability by addressing the root causes of the conflict and fostering trust between neighbours,” according to Framework of Hope, a paper summarizing the accord and Special Envoy's mandate issued by Mrs. Robinson's office.

“Together, the Governments and international organisations concerned, donors and peoples of the region can give hope of real change – of a true peace dividend – which provides peace, security and progress for all.”

Mrs. Robinson plans to initiate discussions with leaders and officials from the region on how to translate the agreement into tangible actions and cooperation to end the recurrent cycles of crisis and suffering the Eastern Democratic Republic of the Congo.

Along with meetings with high-level Government officials, she also plans to meet with regional and sub-regional organizations and envoys, as well as with civil society, including women’s organizations, an UN and international partners. 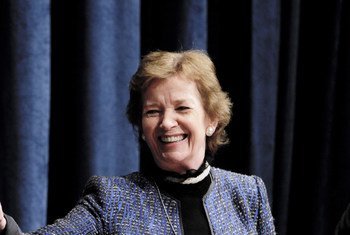