UN Photo/Rick Bajornas
Secretary-General Ban Ki-moon (right) with Crown Princess Mary of Denmark during the inauguration of the newly renovated Trusteeship Council Chamber, which has been restored and updated with new Danish furniture.

26 April 2013
The Trusteeship Council Chamber has reopened in a royal ceremony at the United Nations Headquarters in New York after three years of grand-scale restoration.

“This is an inclusive room where everyone can easily communicate. It fosters dialogue,” Secretary-General Ban Ki-moon said at the re-opening ceremony on Thursday among high level dignitaries, including Princess Mary of Denmark and the Minister for Development Cooperation, Christian Friis.

“Although we no longer meet here on trust territories, we will hold many important discussions in this Chamber. I am confident that they will further advance the values of the United Nations,” Mr. Ban added.

The Trusteeship Council, one of the main organs of the UN, was established to supervise the administration of trust territories as they transitioned from colonies to sovereign nations. The Council suspended its activities in 1994, when Palau, the last of the original 11 trust territories, gained its independence.

In his remarks, Mr. Ban noted the historical importance the Chamber once carried. “It may be difficult now to imagine how closely the world once watched what happened in this Chamber. For years, the Trusteeship Council was a symbol of hope for millions of people struggling against colonial domination. Its work was central to the early history of the United Nations. Discussions here led to liberation for scores of countries and territories.”

While the name ‘Trusteeship’ may seem old-fashioned, Mr. Ban said this was a “high compliment” and wished that “the other UN bodies could finish their business with the same effectiveness of the Trusteeship Council.”

The Chamber, originally designed by Danish architect Finn Juhl in 1952, has been revamped in a close collaboration between the UN and the Government of Denmark, with new furniture by Danish designers Kasper Salto and Thomas Sigsgaard.

Among the iconic aspects of the room is a statue of a girl with arms upraised, reading towards a bird which hovers with outspread wings above her head. Carved out of teak wood by Henri Starcke, a Danish sculptor, it symbolizes Mankind and Hope.

“Let us take inspiration from this statue and reach for the sky,” Mr. Ban said. “Let us carry on the tradition of this Chamber and complete our work with success. And let us take on new challenges for a better world.” 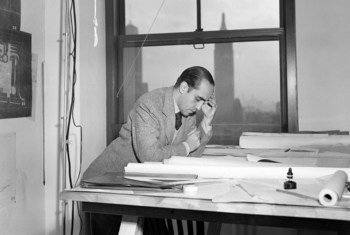 24 April 2013
With an extensive renovation of the great General Assembly Hall imminent, United Nations officials today paid tribute to architect Oscar Niemeyer and other members of the UN board of design in a ceremony that revisited the inception of the iconic Headquarters project.