“The new Mission represents a fresh start for the UN in Somalia and a renewed commitment by the Council to support Somali-owned peacebuilding,” Jeffrey Feltman, Under Secretary-General for Political Affairs, told the 15-member body.

He said that the Federal Government, led by President Hassan Sheikh Mohamud, has been implementing its Six Pillar Policy for stabilization and peace-building in the country, reaching out beyond Mogadishu in an effort to realize its vision of building a unified federal State for the country, which has been beset by conflict for over two decades.

However, he said that the Government’s approach to building new regional administrations is not accepted by all, with a draft charter ratified by three regions for the establishment of a so-called “Jubaland State in southern Somalia, which the Government regards as unconstitutional.

In addition, the Islamist insurgent group Al-Shabaab remained a threat, having retaken a significant town following the withdrawal of Ethiopian troops and ramping up suicide bombings, underscoring the need to rapidly strengthen security.

As the African Union Mission in Somalia (AMISOM) was reaching its “operational limit,” he said, a better-funded and coordinated strategic security approach is required by the international community, one that “recognizes that well-trained and equipped Somali forces are the ultimate exit strategy for international military operations.”

In addition, he supported the Secretary-General’s view that a new political Mission should work with the Government on its peace-building and state-building agenda, replacing the UN’s Mission in Somali – UNPOS – which is based in Nairobi.

Its role, Mr. Feltman said, would be “to act as an enabler, helping to create and galvanize the political and strategic environment in which stabilization and peacebuilding can proceed, including by leveraging other parts of the UN system and international partners.”

In a March 2013 resolution renewing AMISOM’s authorization, the Council said it “agrees with the Secretary-General that UNPOS has fulfilled its mandate and should now be dissolved, and further agrees that UNPOS should be replaced by a new expanded special political mission as soon as possible.”

In that resolution it said that the revised UN presence in Somalia should support recent political gains and to address the urgent ongoing humanitarian and human rights situations and include good offices, advice and assistance on security, peacekeeping and state-building, the preparation of elections, human rights and the rule of law, and assistance for the coordination of international assistance.

The Council, in that resolution, also agreed with the Secretary-General that “the conditions in Somalia are not yet appropriate for the deployment of a United Nations peacekeeping operation.” 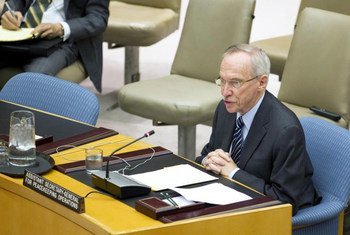 16 April 2013
Despite considerable progress since the end of the violent post-election crisis two years ago, Côte d’Ivoire still faces significant threats to its long-term stability, including the presence of armed elements, transnational crime, terrorism, piracy, and a security sector in need of reform, a top United Nations peacekeeping official said today.