UN Photo/Evan Schneider
Under-Secretary-General for Political Affairs Jeffrey Feltman briefs the Security Council on the situation in the Middle East.

“As the situation inside Syria continues to deteriorate, it is even more vital that everyone collectively work towards preserving regional stability,” Jeffrey Feltman, Under-Secretary General for Political Affairs said, briefing the Council ahead of day-long debate on the situation.

However, he added, “The desire for peace must be cultivated by early measures to reverse negative trends on the ground and build trust.”

He said that the fragile hope triggered by renewed United States engagement must be translated into serious efforts by the parties, maintaining that last month’s visit to the region by President Barak Obama marked an important opening.

Secretary-General Ban Ki-moon met with President Obama on 11 April, agreeing there was a window of opportunity for Israelis and Palestinians to resume negotiations.

“Now is the time for the international community to work in a concerted manner and without delay,” Mr. Feltman said, recalling that Arab leaders at the recent Doha Summit had reconfirmed their intention to send a ministerial delegation to Washington, D.C. on 28 April to discuss the peace process.

Yet, he acknowledge, much depends on whether the parties have the political will to create conducive conditions for resuming a political process.

Noting that Palestinian Authority President Mahmoud Abbas had on 13 April accepted the resignation of Prime Minister Salam Fayyad, Mr. Feltman said the United Nations remained committed to working with its Palestinian partners, under the leadership of President Abbas, towards state building and development.

Outlining recent developments, he said Israel and Palestine had reached an important agreement on 23 April at the Executive Board of United Nations Educational, Scientific and Cultural Organization (UNESCO), allowing an experts mission to visit the Old City of Jerusalem in mid-May.

However, serious challenges to overall progress remained, he said. The financial viability of the Palestinian Authority was still at risk, he confirmed, reiterating the call for more financial support.

He said that the Palestinian budget approved for the 2013 fiscal year reflected fiscal discipline yet revealed the Authorities increased dependence on external aid to cover its short-term expenses. Total spending would hit 3.8 billion, more than half of which was for wages.

In addition, he said the past month has seen a “considerable” increase in Palestinian casualties, mostly resulting from new clashes with Israeli security forces during Palestinian demonstrations that had grown violent.

Wide protests throughout the West Bank on 30 March were relatively contained compared to previous years, but nonetheless had seen 22 Palestinian protesters and four Israeli soldiers injured.

In all, Israeli security forces in the occupied West Bank had carried out a total of 303 operations, versus 186 in the last reporting period. But violence levels had nearly doubled, with Israeli security operations having resulted in two Palestinian teens dead and 724 injured. A total 354 Palestinians were arrested, including leaders from Hamas and Islamic Jihad.

As for Syria, he recalled that the Council had been briefed only five days ago on the situation there by senior United Nations humanitarian officials. He called for quick action to address the humanitarian situation unfolding inside and outside that war-torn country, adding that Lebanon and Jordan were on the frontline and must also be effectively supported. 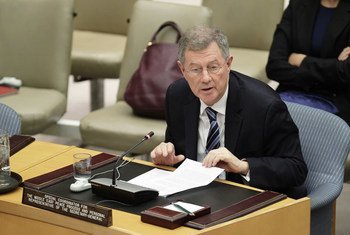 25 March 2013
With the Israeli and Palestinian leaders having reiterated their commitment to a two-State solution, it is vital for the international community to help them bridge their differences and make a serious push for progress in the peace process, a senior United Nations envoy said today.