An independent United Nations expert today urged the Government of Bahrain to honour its international commitments and allow him in to assess whether torture and ill-treatment are taking place in the country, after repeated postponements of planned visits.

“This is the second time that my visit has been postponed, at very short notice. It is effectively a cancellation as no alternative dates were proposed nor is there a future road map to discuss,” UN Special Rapporteur on torture, Juan E. Méndez stressed in a news release.

Mr. Méndez added that he is “deeply disappointed” with the decision to cancel the 8 to 15 May trip which was organized “in the spirit of cooperation” and expressed his compassion with the people of Bahrain who had expected the visit.

The Government’s decision comes after yet another week of continued clashes between demonstrators and security forces and the release of several reports criticizing what they call Bahrain’s failure to hold senior officials accountable for torture since 2011.

In a letter handed to the Special Rapporteur on 22 April, during a meeting in Washington DC, the Government said that the ongoing National Dialogue has unexpectedly taken much longer than envisaged and that a visit could be immensely damaging to the chances of the Dialogue’s success.

Meanwhile, in a statement issued to the media, the Government claimed that Mr. Méndez “put off” the visit.

In response, Mr. Méndez said that the decision to postpone the visit was solely that of the Government, “this was a unilateral decision by the authorities. Unfortunately, it is not the first time the Government has tried to avoid responsibility for the postponement of my visit, which was originally supposed to take place over a year ago.”

He added that that an independent assessment of whether torture and ill-treatment indeed continues despite reforms, and whether obligations towards the rehabilitation of victims have been met “could have contributed to the National Dialogue and strengthened a culture of human rights.”

Mr. Méndez urged the authorities to honour their commitments made to the UN Universal Periodic Review process in September 2012, among which was the acceptance of a recommendation to welcome a visit by the mandated expert on torture and cruel, inhuman or degrading treatment or punishment.

“I will continue to engage with the Government by considering violations submitted to my mandate and by closely monitoring the situation of torture and ill-treatment, including the right of rehabilitation for victims in Bahrain,” he stressed.

Independent experts or special rapporteurs are appointed by the Human Rights Council to examine and report back, in an unpaid capacity, on specific human rights themes. 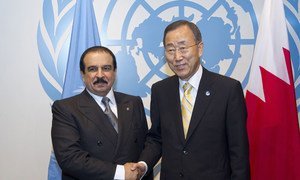 United Nations Secretary-General Ban Ki-moon today welcomed the initiative by the king of Bahrain to convene a national political dialogue, as well as the positive response to the proposal from opposition groups in the Persian Gulf nation.