23 April 2013
A senior United Nations official today urged judicial authorities in Guatemala to ensure that legal proceedings continue without interference against the country’s former head of State and former head of intelligence who stand accused of atrocities committed in the Central American nation over 30 years ago.

“I appeal to the judicial authorities to act responsibly and prevent any attempt at interference, obstruction of justice or manipulation of the law, which would seriously undermine the credibility of the judicial system in Guatemala,” Adama Dieng, the UN Special Adviser on the Prevention of Genocide, said in a news release.

Guatemala’s former president Efraín Ríos Montt and former intelligence chief José Mauricio Rodríguez Sánchez stand accused of committing genocide and crimes against humanity for their roles in Guatemala’s civil war, which lasted from 1960 to 1996 and during which a reported 200,000 people were killed or disappeared.

Despite the charges, on 18 April a first-instance judge called for the annulment of the trial, a decision deemed illegal by the panel of judges overseeing the proceedings. The trial has since been suspended until the country’s constitutional court determines whether it can continue.

“The victims of the atrocities committed during the civil war in Guatemala and their families have waited many years for justice; I hope that they will not have to continue to wait,” continued Mr. Dieng while voicing his concern that “justice delayed is justice denied.”

During the conflict, Guatemala became the theatre for numerous displays of brutality which were ultimately catalogued and revealed by the UN-backed Historical Clarification Commission of Guatemala in its report on the war.

At a press conference announcing the release of the report at UN Headquarters in 1999, two members of the Commission, Christian Tomuschat of Germany and Otilia Lux de Cotí of Guatemala, described the “atrocious nature” of some of the massacres committed by Government forces against ethnic enclaves during the conflict.

In particular, they noted the Government's “scorched earth” policy which led to the destruction of entire villages and the murders of all their inhabitants, including women, children, babies and elderly people. The two experts also stated that pregnant women and babies had been victimized with “particular brutality.”

The UN Special Adviser noted that case was indeed unique as it was the first time that a former head of State had been indicted by a national tribunal on charges of genocide and that the “historical precedent” could ultimately “serve as an example to those States that have failed to hold accountable those individuals responsible for serious and massive human rights violations.”

At the same time, he underscored the importance of bringing the case to a conclusion and determining accountability in view of Guatemala’s future.

“Only in this way can Guatemala consolidate its peace process and build trust and confidence among its diverse populations,” Mr. Dieng concluded. “Such trust and the credibility of its institutions are indispensable for the prevention of future abuses.” 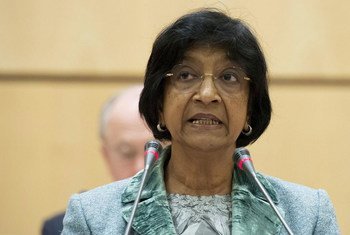 18 March 2013
The top United Nations human rights official has applauded the beginning of the “historic” trial of Guatemala’s former head of State and former head of intelligence who are both accused of crimes committed in the Central American nation over 30 years ago, and urged local authorities to ensure the execution of a fair and independent legal proceeding.