Debt distress, no longer just the province of poor countries, is a drag on development programmes as well as on the world economy, United Nations leaders said today as economic experts and representatives of international financial institutions met to discuss practical and equitable mechanisms for restructuring sovereign debt.

“The difference between today’s crisis and other recent crises is that, today, problems related to sovereign debt are not confined to emerging markets or low income countries,” Néstor Osorio, president of the Economic and Social Council (ECOSOC) said at the opening of a special meeting entitled “External debt sustainability and development: Lessons learned from debt crises and ongoing work on sovereign debt restructuring and debt resolution mechanisms.”

Today’s meeting comes one day after ECOSOC hosted a special high-level forum with the Bretton Woods institutions, the World Trade Organization (WTO) and the UN Conference on Trade and Development (UNCTAD) on “Coherence, coordination and cooperation in the context of financing for sustainable development and the post-2015 development agenda.”

Mr. Osorio noted that today’s debate on sovereign debt restructuring has important implications for the financing of sustainable development and the development agenda following the 2015 deadline of the Millennium Development Goals (MDGs) that aim to slash extreme poverty and accompanying ills.

The total external debt of developing countries and countries with economies in transition surpassed $4 trillion by the end of 2010, according to Secretary-General Ban Ki-moon’s 2012 report on external debt sustainability and development, with an estimated 12 per cent increase annually after.

Also addressing the special meeting, the Assistant Secretary-General of the UN Department of Economic and Social Affairs, Shashad Akhtar highlighted the importance of closing the gaps in debt management through restructuring, early response and coordination.

“There is a need for a process through which there is early engagement of debtors and creditors to frankly address unsustainable situations on a timely basis, which would reduce overall uncertainty in affected economies, as well as for a framework for creditor consultation and structures for engagement with debtors,” Ms. Akhtar said.

She added that unlike in the 1980s when the main creditors were large commercial banks, today’s bonds are held by a variety of entities and individuals. As a result, one of the issues that needs to be addressed is collective action involving creditors.

Meanwhile, the Secretary-General of the UN Conference on Trade and Development (UNCTAD), Supachai Panitchpakdi, cautioned that not all origins of the debt crises are financial and as a result cannot be solved solely with financial means.

“If you go overboard with austerity measures, that might reduce growth without reducing debt,” Mr. Panitchpakdi said.

He noted that piecemeal solutions had been put forward in hopes that banking system would resume lending without cleaning up its balance sheets, while countries had waited too long for restructuring efforts to be executed, creating economic uncertainties and hindered growth.

Today’s ECOSOC meeting included a series of presentations from senior officials of the World Bank and International Monetary Fund (IMF) and included a range of roundtable discussions, such as one on the perspective of the private sector on restructuring debt.

This afternoon, the Nobel Prize Laureate and President of Columbia University, Joseph Stiglitz, will give the keynote address entitled “Gaps in legal and institutional structures for debt restructuring.”

The meetings are part of a larger effort to strengthen relations between the UN and international financial institutions such as the World Bank and the IMF.

Last week, Secretary-General Ban Ki-moon co-hosted a series of events on themes linked to the MDGs with World Bank President Jim Yong Kim on the sidelines of the 2013 spring World Bank-IMF meeting. 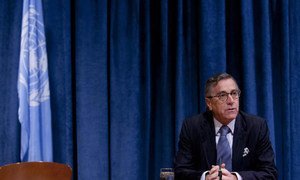 Poverty reduction, trade growth and job creation require greater coordination between the United Nations and the Bretton Woods institutions, the head of the Economic and Social Council (ECOSOC) today urged at the opening of a special high-level meeting on sustainable development and the post-2015 development agenda.