Secretary-General Ban Ki-moon and the Secretary-General of the League of Arab States, Nabil Elaraby, today met with their special representative Lakhdar Brahimi to discuss ways to help the Syrian parties begin a political process which could help end the violence while protecting all people and communities in the shattered country.

During the meeting, held at the UN Headquarters in New York, Mr. Ban reiterated his call on the Security Council to find unity and put all of its weight behind a political solution in Syria and Mr. Brahimi’s efforts to that end.

Speaking to journalists after a closed-door briefing to the 15-member Security Council last week, Mr. Brahimi said the situation in Syria had disintegrated into “the most serious crisis” and urged the UN body to act.

Latest figures showing 6.8 million people in need, 4.25 million people internally displaced and an additional 1.3 million seeking refuge in neighbouring countries from a conflict that has killed over 70,000 people since opposition forces sought to oust President Bashar Al-Assad in 2011.

Earlier in the day, Mr. Ban had called for stemming the supply of arms to any side in the Syrian conflict, saying in a closed-door meeting that more arms would only mean more deaths and destruction.

Mr. Ban also told Mr. Elaraby and the Prime Minister that there could no alternative to a political solution to end the Syrian conflict, and highlighted the urgent need for dialogue between the parties.

During the same meeting, Mr. Ban said he continued to urge the Israelis and Palestinians to redouble their efforts to reach an agreement on all core issues of the conflict. According to his spokesperson, Mr. Ban “stressed the absolute importance of progress in 2013, adding that the current opportunity should not be missed.”

Mr. Ban also reiterated his deep concern over the conditions of Palestinian prisoners in Israeli custody and the UN’s position that individuals detained should be charged and face trial in accordance with international standards, or else be promptly released.

In addition, Mr. Ban today reiterated the readiness of the UN Mission to investigation allegations of chemical weapons use in Syria. In remarks to an event focused on the Arab World and prevention of the proliferation of weapons of mass destruction to non-state actors, Mr. Ban said that “while the mission awaits consent from the Government, it has carried out fact-finding activities based on available information.”

The participants gathered to discuss the implementation of Resolution 1540, which establishes obligation on all Member States to develop and enforce appropriate legal and regulatory measures against the proliferation of chemical, biological, radiological, and nuclear weapons and their means of delivery, in particular, to prevent the spread of weapons of mass destruction to non-state actors.

“The most reliable way to prevent both the proliferation and use of these weapons is through their total and verified elimination. There are no ‘right hands’ that can handle these ‘wrong weapons’,” Mr. Ban said. 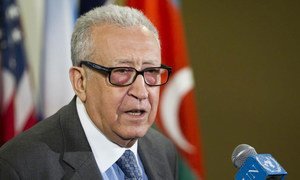 The Joint Special Representative of the United Nations and the League of Arab States on the Syrian crisis, Lakhdar Brahimi, today reiterated his calls for the Security Council to act in Syria which he calls ‘the most serious crisis.’