During a visit to the Central African Republic today, the United Nations’ top political official appealed for urgent efforts to establish security and end abuses against civilians, while reiterating international calls for a full return to constitutional rule.

“Foremost at this time is the urgent need to establish law and order throughout the country and to protect civilians from abuse,” Jeffrey Feltman, the Under-Secretary-General for Political Affairs told the press in the country’s capital, Bangui.

“There must be a stop to the killing, the looting, the attacks on civilian population, the violations of human rights and the violent confrontations targeting segments of the population,” he added, addressing in particular sexual violence and the recruitment of children into armed groups.

“Those who have seized power must shoulder their responsibilities and control those elements under their command,” he stressed.

Since the Séléka rebel coalition launched an offensive in December, 1.2 million people have been cut off from essential services and human rights violations have been widespread.

A peace accord, known as the Libreville Agreements, was signed on 11 of January in Gabon, calling for the establishment of National Transitional Council that would elect a transitional government.

The rebels, however, claiming the Government was not complying with its obligations under the accord, continued to gain territory and overran Bangui in late March.

During his visit to Bangui, Mr. Feltman consulted with representatives of the United Nations team, political parties and civil society following a meeting with Prime Minister Nicolas Tiangaye in Douala, Cameroon on 20 April.

In his discussions, Mr. Feltman underscored the calls by the international community and the region for a full return to constitutional order and an end to impunity. He stressed that there should be an inclusive transition within the political framework of the Libreville Accords.

He also called on the international community to devote more focused and sustained attention on the CAR, to prevent recurring crises and instability.

“The Central African Republic cannot continue to be the ‘forgotten crisis’ that emerges briefly on the international radar screen and then slips back into oblivion until the next tragic flare-up,” he said.

At least 4.1 million people, almost half of whom are children, have been directly affected by the crisis and more than 37,000 people have fled the country in the past four months due to the violence.

Also today, the Prosecutor of the International Criminal Court (ICC), Fatou Bensouda, issued a statement warning those committing serious crimes against civilians in the Central African Republic that the situation was “under close scrutiny by my office.” 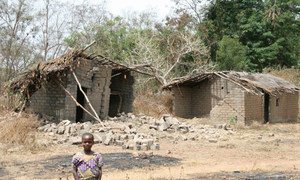 Meeting in Douala, Cameroon with the Prime Minister of the Central African Republic (CAR), the United Nations' political chief has affirmed the world Organization's continued support for transitional political agreements and humanitarian efforts in the embattled country.