19 April 2013
Secretary-General Ban Ki-moon is meeting today with public and private donors on the sidelines of the World Bank-International Monetary Fund meeting in Washington DC to discuss financing energy, poverty and sustainable development projects to boost progress towards the Millennium Development Goals (MDGs).

“The United Nations and the World Bank are strongly committed to working with each other, and with our many partners in civil society and the private sector, to bring positive change into the lives of people,” the Secretary-General said in a poverty event this morning alongside the President of the World Bank, Jim Yong Kim.

Mr. Ban said the world is at a “tipping point” and urged the World Bank and other financial partners to raise the momentum to break out of the poverty trap and address the injustices of inequality by supporting the MDGs and the post-2015 sustainable development agenda.

Also today, Mr. Ban and Mr. Kim co-chaired the first meeting of the Advisory Board of the Sustainable Energy for All. Comprised of 42 representatives of business, finance, governments and civil society, the global public-private partnership aims to provide universal access to modern energy; double the share of renewable energy in the global energy mix; and also double the global rate of improvement in energy efficiency by 2030.

“Sustainable Energy for All marks a new era in UN-World Bank relations. Together we have unparalleled convening power,” Mr. Ban told the audience.

They are tasked with undertaking high-level advocacy for action on energy and mobilising businesses, investors and civil society to move forward with ‘high-impact initiatives’ related to off-grid lighting, growing energy efficiency, energy for women's health and the procurement of renewable energy.

“The initiative has demonstrated the ability to mobilise multibillion-dollar commitments, leverage large-scale investments and build on a rapidly expanding knowledge network,” the UN and World Bank said in a joint statement, adding that projects under its umbrella have been launched in more than 70 countries.

In the statement, Mr. Kim noted that more than 1.2 billion people are without access to electricity, and another 2.8 billion use solid fuels to cook and heat their homes.

“Delivering universal access to electricity and safe household fuels is a fundamental condition to end poverty. We have to meet this challenge in a sustainable way that also takes into consideration the battle against climate change,” he said.

Kandeh Yumkella is Mr. Ban’s Special Representative for Sustainable Energy for All. He recently appeared in a public service announcement with former US president Al Gore and supermodel and United Nations Goodwill Ambassador Gisele Bündchen to urge support for the initiative.

Turning to Governments, Mr. Ban urged Ministers at a meeting on sustainable development and climate change financing to deliver on their climate commitments and serve as catalysts for private funding,

“Governments have agreed to the objective of mobilizing $100 billion a year by 2020 from public and private sources. I am committed to achieving this goal, and I count on you to help me to bring the public and private sectors together to overcome barriers to climate investments.”

“Climate finance is an investment in the future and must not be constrained by these times of austerity,” he emphasized.

Mr. Ban noted that climate change is the “greatest threat to all our development objectives” and impacts the poorest and most vulnerable the hardest.

As a result, he will convene a related high-level meeting in New York next year on the topic, he said.

“I am inviting leaders to engage in providing solutions that can deliver an ambitious agreement. We must do our utmost to focus political attention on climate change and accelerate progress on the ground at all levels.

Also in Washington today, the Secretary-General met with, the United Kingdom’s Secretary of State for International Development, Justine Greening, to discuss the post-2015 development agenda, and the Development Cooperation Forum planned for 2014.

According to his spokesperson, Mr. Ban welcomed the UK’s leadership role in promoting effectiveness and accountability in development cooperation.

Before returning to New York today, Mr. Ban is expected to meet with the heads of multilateral development banks to welcome the growing collaboration between those banks, the UN system and the Bretton Woods institutions.

He is expected to call for the mobilization of adequate financing for coordinated global efforts to achieve lagging MDGs, and for a coherent framework for post-2015 priorities. 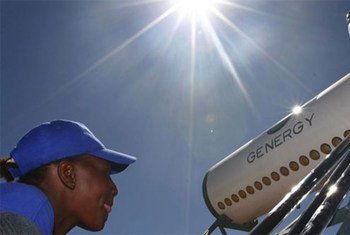 17 April 2013
Warning that the way the world produces, shares and uses energy is unsustainable, Secretary-General Ban Ki-moon today called on governments and the private sector to collaborate in providing a cleaner, low-carbon model that benefits both people and the planet.