18 April 2013
Growth in Asia-Pacific remains subdued due to the impact of persistent weaknesses and uncertainties in the developed economies, the United Nations reported today, urging Governments to implement macroeconomic policies that focus more on inclusivity and sustainable development.

The Survey cautioned, however, that “much lower growth compared to recent years could become a new normal for many regional economies if present economic trends were to continue,” and this could cause an estimated economic output loss of about $1.3 trillion by the end of 2017.

According to the report, the flagship publication of the UN Economic and Social Commission for Asia and the Pacific (ESCAP), the growth rate of the region’s developing economies is projected to rise to 6 per cent in 2013 from 5.6 per cent last year, but compared to 7 per cent in 2011.

“The global economic conditions remain challenging for the region. Since the beginning of 2013, we have witnessed some measurable improvement in global financial markets, however we have not seen robust improvement in the real economy,” Pingfan Hong, Chief of the Global Economic Monitoring Unit at the UN Department of Economic and Social Affairs (DESA), told journalists in New York.

The survey estimated that since the onset of the global financial crises in 2008, GDP for the region had lost about 3 per cent if compared with the trend growth of the region before the crises, a loss of roughly $870 billion in output.

“The 2013 Survey reminds us that this is no time for complacency, as the need for a more inclusive and sustainable pattern of economic and social development continues to be critical,” UN Under-Secretary-General and Executive Secretary of ESCAP, Noeleen Heyzer, said in her preface to the Survey.

According to other figures in the Survey, oil and gas exporting North and Central Asia will continue to benefit from high global energy prices, maintaining steady growth.

In South and South-West Asia, the economies of Afghanistan, Bangladesh, Bhutan and Sri Lanka are projected to grow 6 per cent or more in 2013.

The export-led economies in East and North-East Asia as well as South-East Asia are expected to gain from “improved, although still tepid, global trade.”

In Indonesia, ESCAP noted that domestic demand will drive the economy to a growth rate of 6.6 per cent. Strong private consumption will support growth in the Philippines at 6.2 per cent and 5.3 per cent in Thailand, while Viet Nam’s economy is expected to pick up in the second half of 2013 to 5.5 per cent.

Meanwhile, growth is expected to decelerate in Pacific island developing economies in 2013 due to a sharp, energy sector-led slowdown in Papua New Guinea, the largest Pacific island economy.

The Survey also argues that long-term structural issues, such as rising inequality, energy and infrastructure shortages are compounding the regional slowdown and the “structural solution to invigorating the domestic drivers of growth…will lie in making the development process more inclusive and sustainable”.

According to figures cited, it will cause many of the countries surveyed 5 to 8 per cent of GDP to finance the social protection and sustainable development policies supported, such as creating job guarantee programmes and universal pension schemes.

Among measures to support inclusive development, the Survey argues for a minimum wage policy. It estimates that the recent minimum wage hikes in Thailand could increase job growth by up to 0.6 per cent and real GDP growth by 0.7 per cent by 2015.

While in China, efforts to reduce reliance on exports and boost domestic consumption-driven demand by promoting inclusive and sustainable growth will spur domestic growth and benefit intraregional trade. ESCAP estimates the new policies would generate an additional $13 billion worth of exports by other Asia-Pacific countries to China during 2013-2015 and cause regional export growth to pick up by up to 0.5 percentage points above the level it would otherwise have been.

“The good news is that Asia and the Pacific has already started to rethink and reinvent itself. These efforts should be supported, enhanced and propagated throughout all countries in the region,” Ms. Heyzer said. 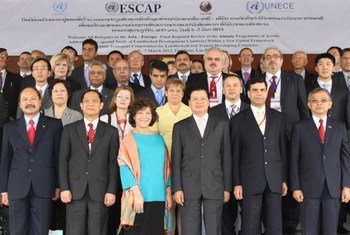 6 March 2013
United Nations representatives and senior government officials from landlocked developing countries (LLDCs) in Europe, Asia and the Pacific are meeting in Vientiane, Laos, to discuss how to fully participate in global trade and overcome isolation from world markets and other socio-economic consequences of not having access to a sea.