The top United Nations officials in Iraq today welcomed a generous offer by Germany of humanitarian admission for approximately 100 residents from Camp Hurriya, located near the Iraqi capital, Baghdad, and urged the camp residents to cooperate with the UN for a speedy and safe resettlement.

“Germany’s offer follows a similar one by the Albanian government to relocate 210 residents in Albania, and I am very grateful to both countries for having offered durable solutions for the residents of Camp Hurriya,” said Special Representative of the Secretary-General for Iraq, Martin Kobler.

Camp Hurriya serves as a transit facility for more than 3,000 exiles, most of them members of a group known as the People’s Mojahedeen of Iran, where a process to determine their refugee status is being carried out by the UN refugee agency (UNHCR). With the latest offer, 10 per cent of the camp’s residents now have offers to relocate to third countries.

In the same statement, UNHCR Representative in Iraq, Claire Bourgeois, encouraged other countries to follow Albania and Germany’s lead, “This generous offer by Germany is a demonstration of international solidarity and burden-sharing for a vulnerable population.”

In addition, in his recent report about the situation in Iraq, Mr. Ban urged those who express support for the residents of Camp Hurriya and the remaining residents of another camp, New Iraq, to stop spreading insults and falsehoods about Mr. Kobler, who heads the UN Assistance Mission for Iraq (UNAMI), and instead help to promote a durable solution.

Also today, Mr. Kobler expressed his deep concern that Iraq continues to implement the death penalty. The most recent execution of 21 prisoners took place on 16 April, according to UNAMI.

“I regret that repeated calls of the United Nations to suspend the implementation of death sentences were not heard,” Mr. Kobler said.

Meanwhile, final preparations are underway in parts of Iraq for the 20 April Governorate Council Elections.

Mr. Kobler today urged eligible Iraqis to actively participate for the success of the poll, “I am calling on all women and men to cast their ballots for a better future for them and their children.”

“My appeal goes particularly to the young Iraqis, because you are the future of this country,” he added.

Stressing that it is the duty of all political leaders to safeguard the integrity of the democratic process, Mr. Kobler underlined that “consolidation of democracy will depend on the willingness of Iraq's political leaders to collectively ensure a transparent and peaceful election, free of intimidation or political interference”.

“Of equal importance is my appeal to the Iraqi security forces to remain on heightened alert and to enable voters to reach polling centres and cast their vote in a safe environment, without fear of violence,” he concluded.

At least 15.5 million Iraqis are eligible to vote in upcoming polls, according to official estimates, where more than 8,000 candidates are reportedly vying for 378 seats. 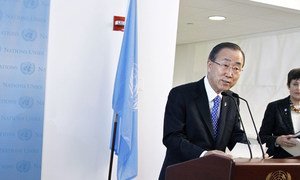