Developing sustainable urban infrastructure benefits not just the environment, but can also boost economic growth and social stability, according to a United Nations report released today, which stresses the need to transition to resource-efficient technologies in cities, given scarce natural resources.

“To date, the trend towards urbanization has been accompanied by increased pressure on the environment and growing numbers of urban poor,” said the UN Environment Programme (UNEP) Executive Director, Achim Steiner, at the launch of the report in Nairobi, Kenya.

“But unique opportunities exist for cities to lead the greening of the global economy by increasing resource productivity and innovation, while achieving major financial savings and addressing environmental challenges,” Mr. Steiner said.

Around three-quarters of the world’s natural resources are already consumed in cities, and the proportion of the global population living in urban areas is set to rise to 70 per cent by 2050.

The study says much greater effort is needed to support new and improved infrastructure for water, energy, transport, waste and other sectors – generally located in and around cities – to wean the world off unsustainable consumption patterns, and avoid serious economic and environmental implications for future generations.

The report, which was produced by the UNEP-hosted International Resource Panel (IRP), features 30 case studies around the world that show how sustainable infrastructures have created scores of green jobs and reduced environmental degradation.

Fore example, in Melbourne, Australia, carbon emissions dropped by 40 per cent after the introduction of energy efficiency measures in public buildings, while in Cape Town, South Africa, a re-fit of low income housing with solar water heaters and efficient lighting has saved over 6,500 tonnes of carbon per year, cut respiratory illnesses by 75 per cent, and reduced the cost of hot water for poor households.

The cost of meeting the urban infrastructure requirements of the world’s cities between 2000 and 2030 is estimated at $40 trillion – both through the building of new infrastructure or retrofitting existing facilities, the report states.

“Older cities may have to retrofit and replace inefficient infrastructure into which they have been locked for decades to achieve decoupling, but newer and expanding cities have the advantage of flexibility. They can ‘get it right’ the first time,” said the Executive Director of UN-HABITAT, Joan Clos.

“In an era of rising energy prices, an early transition to systems that consume increasingly cheaper renewable energy sources will pay off quickly,” Mr. Clos said. 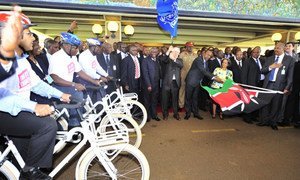 A United Nations forum in Kenya today called on governments to improve living conditions for millions of people in urban areas across the world, stressing that they need to respond to the demands of young and poor citizens who make up a significant portion of city dwellers.