17 April 2013
Conflict-related sexual violence, horrific in itself, is also an impediment to national reconciliation and development, top United Nations officials told the Security Council at the start of a day-long debate, urging increased political and financial pressure on those who commit, command or condone sexual violence in war zones.

Secretary-General Ban Ki-moon told the 15-member Security Council that while preventing sexual violence is a primary responsibility of Governments, the international community must strengthen its collective efforts to root out its causes and prevent sexual attacks, which primarily target women and girls, but also affect men and boys.

“To succeed, we must use all the tools at our disposal. This includes our peacekeeping and political missions, our mediation efforts and our efforts to protect human rights and deliver humanitarian assistance,” Mr. Ban told the meeting, which was presided over by Rwandan Foreign Minister Louise Mushikiwabo, whose country holds the rotating Presidency of the Security Council for April.

“It encompasses the work of all those involved in building peace in the aftermath of conflict, from restoring the rule of law and advancing gender equality to promoting early recovery and longer-term development,” he added.

Mr. Ban highlighted efforts in peacekeeping missions in Sudan, South Sudan and the Democratic Republic of the Congo to establish monitoring, analysis and reporting arrangements in coordination with UN Country Teams, to be completed “by the end of the year.”

These efforts, combined with other tools, such as the updated human rights database of Office of the High Commissioner on Human Rights (OHCHR) and the protection monitoring project of the UN refugee agency (UNHCR), will better place the UN “to systematically identify trends and patterns and thereby become better at preventing these crimes.”

Also addressing the Security Council, Mr. Ban’s Special Representative on Sexual Violence in Conflict, Zainab Hawa Bangura, outlined the Secretary-General’s latest report on the topic which reviews 22 conflict areas – conflict, post-conflict and situations of concern – which include Mali for the first time.

Among the key themes in the report, Ms. Bangura said, was the nexus that includes sexual violence and the illicit extraction of natural resources.

In her remarks, she also discussed sexual violence as a driver of civilian displacement and as an interrogation tactic, as well as the plight of women forced into marriage and sexual slavery by armed groups and children born of wartime rape, on whom there is little or no information and as such no meaningful programmatic interventions.

“The report emphasizes the urgency of ensuring that sexual violence considerations are explicitly and consistently reflected in peace processes and peace agreements, and in all Security Sector Reform and Disarmament, Demobilization and Reintegration processes in which the United Nations is involved,” Ms. Bangura told the Security Council.

She also pointed to the need to continue UN-efforts to address the negative effects of war-time rape, particularly “critical health, psycho-social, legal and other interventions” that survivors of sexual health must have to rebuild their lives.

In addition, Ms. Bangura stressed that the international community must throw a more concerted spotlight on the perpetrators.

“The continued engagement of the Security Council must serve as an unequivocal statement of intent: sexual violence in conflict will not be tolerated, and the full force of international order will be brought to bear to ensure accountability for such crimes,” she said.

Ms. Bangura also urged the Council to “raise the cost and consequences” for those who commit rape, which, she maintained, remains largely “cost-free”.

“Sexual violence has been used through the ages precisely because it is such a cheap and devastating weapon, but more deadly than any bomb. We can and must reverse this reality, making it a massive liability to commit, command or condone sexual violence in conflict,” she said, adding that however great the commitment of the UN, it cannot substitute for the political will and action of national authorities.

Among other key recommendations in the Secretary-General’s report is a collective call to include the fight against conflict-related sexual violence at the forefront of peace efforts.

“Let us make the commitment around this table today that in situations where sexual violence is a concern, there will never again be a peace agreement, ceasefire agreement, or ceasefire verification mechanism that does not include sexual violence prevention and response as a part of its rationale and definition,” Ms. Bangura urged.

“This includes the agreements that must eventually be concluded in Mali and Syria, to bring an end to these conflicts,” she added.

Ms. Bangura said she plans to take up invitations by the authorities of Syria, Mali and South Sudan to visit those countries “as soon as possible.” 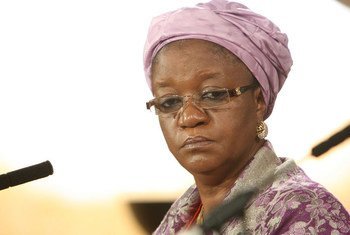 11 April 2013
An initiative announced today in London by the Group of Eight (G8) industrialized countries to ramp up the fight against rape and other sexual violence in conflict represents “a beacon of light and hope” for the countless survivors around the world, a United Nations envoy said today.