16 April 2013
The United Nations General Assembly is focused on achieving the Millennium Development Goals (MDGs) and fostering a successor development agenda, the President of the UN body said today, highlighting upcoming events to increase momentum as the 2015 deadline for both efforts approaches.

Vuk Jeremic, President of the General Assembly, told journalists in New York that he is putting a lot of my time and energy into working with the different UN actors and uniting their efforts on the MDGs “so that the way is paved for the General Assembly in the next 1,000 days to come to a single holistic and comprehensive sustainable development agenda.”

“That is in my opinion possibly the most important piece of work for the General Assembly for the next 1,000 days,” Mr. Jeremic added.

Among the high-level events related to the MDGs, Mr. Jeremic noted plans are underway for a “landmark” conference on 25 September to coincide with the high-level opening of the General Assembly in New York.

The event, Mr. Jeremic said, would be the last big conference aimed at marking the transition from the MDGs to a sustainable post-2015 development agenda.

Among other efforts, Mr. Jeremic said he appointed the ambassadors of Norway and Kazakhstan to help structure a group of 30 experts on financing for sustainable development, following on the General Assembly’s thematic debate yesterday on global economic governance.

Looking ahead, Mr. Jeremic said he is finalizing plans now for a high-level event on the ‘Peaceful Resolution of Conflicts in Africa’ to be held on 25 April to coincide with the 50th anniversary of the Organization of African Unity, the predecessor to the African Union.

“I very much hope that a declaration is going to come out of this thematic debate in celebration of the organization of the African Unity,” Mr. Jeremic said noting that invitees include heads of state and government from African and non-African Member States.

In May, the General Assembly will focus on climate change, green energy and sustainability, the head of the UN body said.

“I strongly believe that the issue of climate change should be discussed in the General Assembly,” Mr. Jeremic stressed, acknowledging that the topic has geopolitical aspects that merit inclusion on the General Assembly’s agenda despite other UN venues designated for such discussions, such as the Conference of the Parties (COP) to the United Nations Framework Convention on Climate Change (UNFCCC).

“I believe that world diplomats will benefit from this event being held,” he stressed.

In the summer, the General Assembly will hold an event on culture and its relation to sustainable development organized with the UN Educational, Scientific and Cultural Organization (UNESCO),

A thematic debate on social inequality, with a particular focus on Latin America, is planned in July with the Organization of American States.

Also in July, a special event “not branded as a thematic debate” will be held on the role of education in the future sustainable development agenda, with a special view on how well the goal had been fulfilled in the MDGs. United Nations Special Envoy for Global Education and former United Kingdom Prime Minister Gordon Brown is a primary participant in that event, according to the General Assembly President.

“So in front of us we have Africa, climate change, culture, social inequality and education, these are the main topics for the rest of the year,” Mr. Jeremic noted.

FEATURE: Indigenous activist fights to save his tribe and the Amazon rainforest 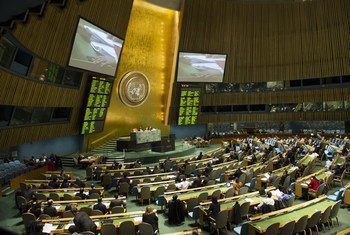 15 April 2013
The United Nations General Assembly today is holding a thematic debate with the Group of 20 major economies, or G20, to strengthen interaction between the two bodies and to improve global economic governance.