16 April 2013
Senior United Nations officials in Sudan today called for immediate humanitarian access to areas of southern Darfur where tens of thousands of civilians have gathered for safety near African Union-UN peacekeeping bases but where ongoing fighting prevents relief teams from reaching them.

“The lives of thousands of displaced civilians, who are still waiting for humanitarian aid, are at stake here. I am deeply concerned about their safety, security and well-being,” said the Joint Special Representative, Mohamed Ibn Chambas. “I urge all sides to protect the civilians and respect international human rights and humanitarian law,” he added.

According to the Government’s Humanitarian Aid Commission, an estimated 36,000 people have sought protection at bases of the African Union-United Nations Mission in Darfur (UNAMID), in the vicinity of Labado and Muhajeria villages.

Fighting continues in the area, with reports today that the Sudanese Armed Forces, supported by other armed groups, have taken control of Labado town from the Sudan Liberation Movement/Minni Minawi (SLA/MM) after fierce fighting, according to UNAMID.

At least four civilians were killed and six others wounded in that fighting, UNAMID’s spokesperson said, and the Mission is treating the wounded. In Muhajeria, the situation remains quiet but tense, the Mission reported.

Earlier today, the UN Resident and Humanitarian Coordinator in the Sudan, Ali Al-Za’tari expressed “serious concern” about the safety and well-being of civilians caught up in fighting.

Mr. Al-Za’tari called for immediate humanitarian access to allow humanitarian teams to assess the condition of all affected civilians – especially women, children and elderly people – and to provide them with the necessary relief supplies.

“Reports received by the United Nations indicate an outbreak of diarrhoea among children requiring urgent and immediate assistance,” Mr. Al-Za’tari said in a statement from the UN Office for the Coordination of Humanitarian Affairs (OCHA) in Sudan.

He also urged the Government and the SLA/MM faction to protect civilians and stressed that civilians wanting to leave must be allowed to move out safely to avoid being trapped in pockets of ongoing armed conflict.

Concerns over security and humanitarian access topped the agenda at yesterday’s Tripartite Coordination Mechanism on UNAMID in Addis Ababa, Ethiopia. Comprised of representatives from the Government of Sudan, the AU and the UN, the forum, which meets regularly, aims to resolve issues and challenges related to UNAMID deployment and operations.

In yesterday’s meeting, the AU and the UN expressed concern about the increased reports of armed clashes and inter-communal violence in Darfur.

UNAMID representatives noted “with concern” that delays in granting peacekeepers access to these areas negatively impacts the quality and efficiency of the Mission in carrying out its mandate. The Government noted that many of the restrictions were due to security concerns and requested that there be increased coordination at the technical level.

Also during the meeting, representatives of the AU and UN reiterated their calls for rebel groups to join the peace process by coming to the negotiation table.

The next Tripartite meeting is scheduled to be held in Khartoum, Sudan, in July. 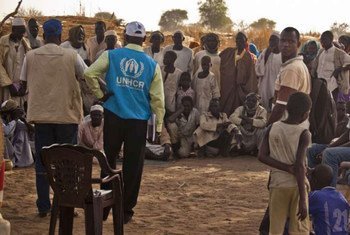 12 April 2013
Some 50,000 refugees from south-western Darfur have arrived in Chad following fresh tribal clashes, the United Nations refugee agency said today, urging more shelter, clean drinking water, food and medicine in what is called the largest influx of refugees from Sudan into Chad since 2005.