Flickr/See-ming Lee
An activist waves a rainbow flag, an international symbol for the rights of gay, lesbian, bisexual and transgender people.
15 April 2013

Pledging that “we must right these wrongs,” Secretary-General Ban Ki-moon today denounced discrimination against lesbian, gay, bisexual and transgender (LGBT) people, and declared that religion, culture and tradition can never be a justification for denying them their basic rights.

“Governments have a legal duty to protect everyone,” he said in a video message to the Oslo Conference on Human Rights, Sexual Orientation and Gender Identity, voicing outrage at the assault, imprisonment and murder of. LGBTs. “Some will oppose change. They may invoke culture, tradition or religion to defend the status quo.

“Such arguments have been used to try to justify slavery, child marriage, rape in marriage and female genital mutilation. I respect culture, tradition and religion – but they can never justify the denial of basic rights.”

Mr. Ban, who has frequently condemned violence and discrimination based on gender identity and sexual orientation, said the world should be outraged when people suffer discrimination because of who they love or how they look.

“This is one of the great, neglected human rights challenges of our time. We must right these wrongs,” he said, warning that far too many governments still refuse to acknowledge the injustice of homophobic violence and discrimination.

“My promise to the lesbian, gay, bisexual and transgender members of the human family is this: I am with you. I promise that as Secretary-General of the United Nations, I will denounce attacks against you, and I will keep pressing leaders for progress.”

The conference is jointly sponsored by Norway and South Africa and is one in a series of regional seminars scheduled to take place in France, Brazil and Nepal in March and April, and another is planned for Africa. The main purpose of these seminars is to gain better understanding of the specific human rights challenges for sexual minorities in each region, and to discuss how these challenges may best be overcome.

The seminars stem from a report issued by the Office of the High Commissioner for Human Rights addressing the responsibility of states to end violence and discriminatory laws and practices based on sexual orientation and gender identity. 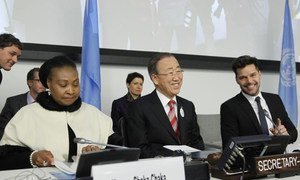