15 April 2013
In a joint appeal for an urgent political solution to the prolonged crisis in Syria which has killed some 70,000 people, the heads of five United Nations agencies today called on political leaders to meet their responsibility to the people of Syria and to the future of the region.

“After so many families torn apart and communities razed, schools and hospitals wrecked and water systems ruined […] there still seems to be an insufficient sense of urgency among the governments and parties that could put a stop to the cruelty and carnage in Syria,” they said.

In an article published in the New York Times, Under-Secretary-General for Humanitarian Affairs, Valerie Amos, Executive Director of the World Food Programme (WFP) Ertharin Cousin, UN High Commissioner for Refugees António Guterres, Executive Director of the UN Children’s Fund (UNICEF) Anthony Lake, and the Director-General of the World Health Organization (WHO), Margaret Chan, said their agencies are working at overcapacity to help those affected by the violence, but stressed that finding a solution to the conflict is the only way to stop the growing needs of the population.

“We ask that they use their collective influence to insist on a political solution to this horrendous crisis before hundreds of thousands more people lose their homes and lives and futures — in a region already at the tipping point,” they urged.

More than five million people have been displaced by the conflict which began over two years ago with UN agencies fulfilling basic needs. In the past few weeks, the agencies have separately warned that their resources are running low, and added that without additional funds they will be forced to scale back relief efforts.

Over a million refugees in neighbouring countries have been given shelter while UN agencies have helped 5.5 million Syrians get access to food, water and sanitation as well as basic health services, including vaccinations to over 1.5 million children against measles and polio.

“Our agencies and humanitarian partners have been doing all we can,” the UN officials said. “But it has not nearly been enough. The needs are growing while our capacity to do more is diminishing, due to security and other practical limitations within Syria as well as funding constraints. We are precariously close, perhaps within weeks, to suspending some humanitarian support.”

“Our appeal today is not for more resources, needed as they are. We are appealing for something more important than funds,” they said. “To all involved in this brutal conflict and to all governments that can influence them:

In the name of all those who have so suffered, and the many more whose futures hang in the balance: Enough! Summon and use your influence, now, to save the Syrian people and save the region from disaster.” 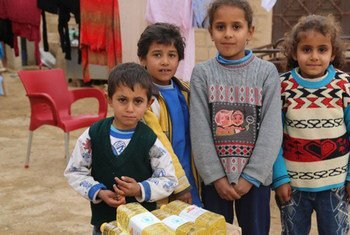 12 April 2013
The United Nations food relief agency today said it urgently needs $81 million to assist 2.5 hungry people inside Syria and one million refugees in neighbouring countries until June, and warned that without funding it would have to stop many of its current aid programmes.