15 April 2013
The United Nations Security Council today held a debate on preventing conflict in Africa, with calls for top priority to be given to addressing underlying root causes such as poverty, hunger, human rights abuses, marginalization and impunity, especially with regard to sexual violence.

“Conflicts breed where there is poor governance, human rights abuses and grievances over the unequal distribution of resources, wealth and power,” Secretary-General Ban Ki-moon told the 15-member body in an opening address, pledging continued UN support for efforts by regional African organizations to prevent conflict.

In a Presidential Statement, the Council also stressed that tackling the root causes of conflict are crucial to ensuring sustainable peace, in addition to partnership and cooperation between regional and sub-regional organizations in supporting conflict prevention and peace-building

Mr. Ban stressed that mediation efforts must not just be pacts between political elites that address the immediate political problem, but must also allow all stakeholders to participate. “Tensions simmer where people are excluded, marginalized and denied meaningful participation in the political and social life of their countries,” he said. “Unrest flourishes where people are poor, jobless and without hope.”

Noting that 20 African countries are holding elections this year, he said the recent “relatively peaceful” elections in Kenya were an example of how electoral disagreements can be handled through the legal process without recourse to violence, but warned that in other cases, elections can be a source of instability where parties may use them to continue the competition to divide the spoils of war.

He also stressed that agreements, once reached, must be fully implemented, monitored and enforced, noting that in the Central African Republic (CAR), the violation of previous accords by the parties contributed to the resumption of conflict and, eventually, the unconstitutional change of Government.

“The challenges are particularly acute when states are fragile and armed movements operate with impunity across porous borders, often with support from neighbouring states,” Mr. Ban declared, citing Mali as an example where this paved the way for transnational criminal organizations and terrorist networks to disrupt regional stability and compromise territorial integrity.

“Whether in the Horn of Africa or the Great Lakes, the continent is still afflicted by interconnected instabilities spreading from one territory to its neighbours,” he added. “That contagion has many vectors: economic despair, arms flows, massive population displacements, proxy conflicts triggered by relationships of mistrust, and regional rivalries. In our increasingly interconnected world, regional action to prevent or address conflicts is all the more important.”

He noted that in the Democratic Republic of the Congo (DRC), national authorities, regional leaders and the international community are coming together to not only deal with the manifestations of violence, but also address its underlying root causes.

“In all of our efforts across Africa, the United Nations benefits from reinvigorated regional organizations. They are playing a stronger and strategic role as key partners,” Mr. Ban stressed, citing the prompt reaction of the Economic Community of Central African States to the crisis in the CAR and the UN’s efforts to strengthen the Southern African Development Community’s conflict prevention and early warning architecture as well as its 10-year capacity-building partnership with the African Union (AU).

It called for effective security sector reform programmes, strengthening of human rights and the rule of law, protection of civilians, ending all forms of discrimination and political exclusion, including against women and children and protection of persons belonging to national or ethnic, religious and linguistic minorities.

It emphasized the fight against impunity for war crimes, crimes against humanity and genocide, stressed the important role of women in conflict prevention and resolution and in peace-building, and underscored its concerns at the role played by the illegal exploitation of natural resources in fuelling conflicts. It noted that the UN can help States, while fully respecting their sovereignty, to prevent illegal access to those resources.

Speaking on behalf of the AU, Ethiopian Ambassador Tekeda Alemu highlighted the increasing role Africa itself was playing in resolving conflicts on the continent and the growing cooperation between the UN and the AU.

“More than any time in the past, Africa is ready to play its part for peace and stability in the continent, and it has the wherewithal to be a good partner for the United Nations and the Security Council for the realization of this objective,” he said.

Don’t just seek to resolve war once it erupts, prevent it in the first place, says UN chief 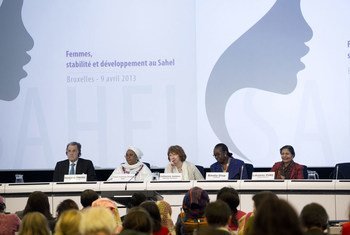 10 April 2013
Dozens of women from the Sahel have met with the United Nations envoy to the region and the world organization’s top official for women’s issues, at a conference to recommend ways to boost economic recovery, political stability and conflict prevention in the troubled African region.