The United Nations envoy for Somalia today condemned the deadly attacks in the capital city, Mogadishu, linked to the Islamist armed group Al-Shabaab, and reiterated the international community's support for the Somali Government.

“I join the government and the people of Somalia in condemning these senseless acts of terror,” the Special Representative of the Secretary-General for Somalia, Augustine P. Mahiga, said in the statement from the UN Political Office for Somalia (UNPOS).

“My thoughts are with families and friends of those killed and injured,” Mr. Mahiga added.

Initial reports indicate that many innocent civilians were killed including women and at least one child, according to UNPOS. Many more were injured in the blasts, which occurred in multiple locations, including at the Regional Court House.

Media sources reported that the assault on the court house consisted of a car bomb explosion and armed attackers who stormed the compound. Witnesses said people rushed to exit the building, some by climbing down ladders leaning against the court house walls.

The Al-Shabaab, an Islamist armed group reportedly linked to Al-Qaida, has claimed responsibility.

Mr. Mahiga was “shocked and outraged” by today's attacks, UNPOS said, stressed that Somalia is making remarkable progress toward stabilization and these great strides “will not be overshadowed by the desperate acts of these cowardly terrorists.”

“The international community will continue to support the Federal government in their efforts to ensure a safe and secure Somalia for all its citizens," Mr. Mahiga stressed.

Somalia marked a historic political watershed last August when it swore-in the first formal parliament and ended a so-called “transition” phase which had begun with the 2004 launch of a UN-backed interim government. The previous functioning government ended in 1991 with the overthrow of dictator Mohamed Siad Barre.

The Secretary-General established UNPOS on 15 April 1995, to help advance the cause of peace and reconciliation through contacts with Somali leaders, civic organisations and the states and organisations concerned. 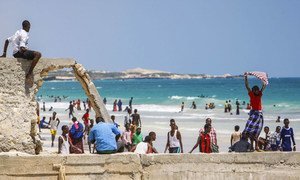 The United Nations political office for Somalia today condemned a series of February terror attacks, urging Somalis to strengthen their resolve against terrorism and work with the authorities to bring the perpetrators to justice.