UNHCR/H. Caux
A displaced Malian woman prepares dinner for her family in the capital, Bamako.

12 April 2013
The United Nations today reaffirmed its determination to back the African-led International Support Mission in Mali (AFISMA) after a terrorist suicide bombing killed three Chadian members of the force, which is helping national efforts to recover the northern Sahara region of the trouble-wracked country from insurgents.

At the same time UN humanitarian officials warned that the food situation in the north of the West African country is alarming, while an international humanitarian aid appeal is grossly underfunded.

“The United Nations condemns the bomb attack which has also injured several members of the same contingent serving under the AFISMA Force,” the UN Office in Mali (UNOM) said in a statement on the attack, which occurred in Kidal, in the far north-east of the country.

“These terrorist acts, however, shall not undermine the United Nations’ determination to support AFISMA in its effort to restore peace and territorial integrity in Mali,” it added, expressing its deep sorrow at the deaths.

In his most recent report on the situation in Mali last week, Secretary-General Ban Ki-moon proposed two options for UN engagement in the country, where renewed fighting since January 2012 has uprooted hundreds of thousands of people and prompted the Government to request assistance from France to stop the military advance of extremist groups.

Under the first option, a UN multidimensional integrated political presence would operate alongside AFISMA, which the Security Council authorized in December, at the request of the Government, to support national efforts to recover the north from the insurgents.

The second option involves the establishment of a UN multidimensional integrated stabilization mission under Chapter VII, which authorizes the use of force, alongside a parallel force. In addition to a political mandate, the mission would carry out security-related stabilization tasks, protect civilians and create the conditions for the provision of humanitarian assistance.

Also today, the UN Office for the Coordination of Humanitarian Affairs (OCHA) said the Central Emergency Response Fund (CERF) has allocated $16 million over the past few weeks to kick-start life-saving humanitarian projects in Mali.

It noted that Mali is at the beginning of the lean season and the food situation in the northern regions of Timbuktu, Gao and Kidal is alarming.

The Consolidated Humanitarian Appeal for Mali has only received about a quarter of the $410 million requested. The CERF’s allocations are therefore critical stop-gap measures pending more substantial funding for the appeal. 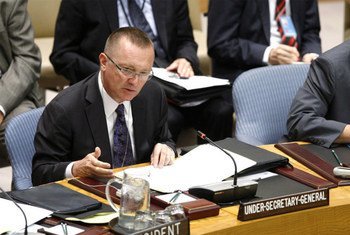 3 April 2013
The United Nations political chief today stressed the need to tackle an array of political, governance and security challenges to help resolve the crisis in Mali, as he outlined Secretary-General Ban Ki-moon’s options for a possible UN peace and security presence in the country, including the deployment of a UN stabilization mission.