“The Secretary-General welcomes President Hadi's ongoing efforts to restructure the Yemeni armed forces with a view to integrating them under unified, national and professional leadership and command based on the rule of law,” his spokesperson said in a statement.

The Security Council noted that the restructuring efforts are in accordance with Yemen's Transition Agreement signed in Riyadh on 23 November 2011, and Security Council resolutions 2014 (2011) and 2051 (2012), and supported the goals and objectives of the National Dialogue Conference.

In their press statement., members of the Security Council reiterated the need for the transitional period in Yemen to be a Yemeni-led process, “underpinned by a commitment to democracy, good governance, rule of law, national reconciliation and respect for the human rights and fundamental freedoms of all people in Yemen.”

They also called upon all parties to honour the timetable and benchmarks set out in the Transition Agreement and for all sides “to act in good faith, in a peaceful, transparent, constructive, and reconciliatory manner.”

Yemen has been undergoing a democratic transition, under the leadership of Mr. Hadi, who came to power in an election in February 2012. This followed the Transition Agreement signed by warring factions in November 2011 on a transitional settlement in the wake of widespread protests similar to those seen across the Middle East and North Africa and the resignation of former president Ali Abdullah Saleh.

Mr. Hadi has said he would work to create the necessary conditions and take the necessary steps to integrate the armed forces under unified, national and professional leadership in the context of the rule of law, as set forth in the Agreement.

According to this week's media reports, President Hadi removed the relatives of his ousted predecessor, Mr. Saleh, from the intelligence agency and the elite Republican Guard.

The move reportedly aims to unify the army, which is divided between Mr. Saleh's allies and opponents.

Meanwhile, Yemen has started a constitution-making process and is starting to prepare for general elections in 2014. As part of this process, the country held a national dialogue conference on 18 March.

Earlier this month, the Secretary-General's Special Adviser Jamal Benomar said Yemen continues to stand as the only example in the region of a peaceful negotiated transition that is based on a comprehensive roadmap and a genuine national dialogue.

The UN has been providing support in Yemen's transition in four key areas: political facilitation; technical support; capacity-building; and a public information and awareness campaign. 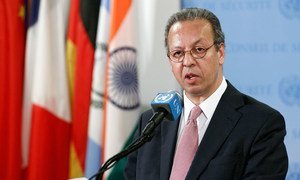 The recent opening of the national dialogue conference is a major milestone for Yemen’s political transition, but serious challenges remain, including unrest in the south of the country, a senior United Nations official warned today.