Delays in carrying out peace agreement harm Darfur, says UN and other partners

Delays in carrying out peace agreement harm Darfur, says UN and other partners

10 April 2013
The United Nations and other partners in an international group working to support the peace efforts in Sudan’s Darfur region have condemned recent attacks in the troubled region and cautioned that any serious delays to carrying out the 2011 peace agreement could further destabilize the entire region.

The fifth Implementation Follow-up Commission (IFC) wrapped up in Doha, Qatar, on 9 April to review the progress made so far in the implementation of the Doha Document for Peace in Darfur (DDPD).

“We are on the right track and peace is the solution,” said the Chairperson for the Implementation Follow-up Commission (IFC), Ahmed bin Abdullah Al Mahmoud, who is also the deputy Prime Minister of the State of Qatar and Minister of State for Cabinet Affairs.

On 14 July 2011, the Sudanese Government - which has been fighting rebel groups in Darfur since 2003 - signed the DDPD with the Liberation and Justice Movement (LJM), and more recently with the Justice and Equality Movement led by Mohamed Bashar (JEM-Bashar).

It is overseen by a follow-up committee that includes Mohamed Ibn Chambas – the head of the joint African Union-UN Mission in Darfur (UNAMID) and Joint Chief Mediator for the AU and UN – and representatives of the AU, the Sudanese Government, armed movements, the Qatari Government mediation and other organizations and governments.

The committee meets regularly to review the progress made so far in implementing the DDPD.

During the latest meeting, representatives from more than 15 countries acknowledged the continued cooperation between the Government of Sudan and the LJM, and reaffirmed the international community’s support to the DDPD as the only framework for peace in Darfur.

“The DDPD has greatly contributed to the decline in levels of violence and to bringing security that large parts of Darfur are enjoying today,” said IFC Chairperson Al Mahmoud, speaking to the media after the meeting.

“It is crucial to preserve and build on the various accomplishments made so far to achieve a sustainable peace in the region,” he added.

He called on the hold-out movements to walk in the footsteps of the Justice and Equality Movement-Sudan (JEM-Sudan) and join the peace process on the basis of the DDPD.

The meeting came one day after a pledging conference which organizers had hoped would raise $7.2 billion to cover reconstruction and development of Darfur over a six-year period.

Meanwhile, thousands of civilians are seeking protection, many of them with their livestock, near joint AU-UN peacekeeping teams in Muhajeria and Labado, East Darfur State, after attacks and “possible air strikes” on the towns.

UNAMID has condemned the 6 April attacks. The peacekeeping mission is working with UN agencies to ascertain the best means of supporting aid delivery to the population, particularly the civilians concentrated around the team site. 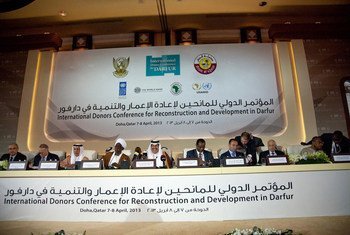 8 April 2013
The International Donor Conference for Reconstruction and Development in Darfur wrapped up today with calls from Secretary-General Ban Ki-moon for the Government of Sudan to demonstrate its commitment to the region and to facilitate humanitarian and development work there.