9 April 2013
Secretary-General Ban Ki-moon and Pope Francis today discussed what can be done to accelerate work to reduce poverty and advance economic development during a meeting in the Vatican.

“We discussed the need to advance social justice and accelerate work to meet the Millennium Development Goals. This is vital if we are to meet the millennium promise for the world’s poorest,” Mr. Ban told reporters in Rome after his first meeting with Pope Francis.

“It was an uplifting, hopeful meeting. Pope Francis is a man of peace and purpose. He is a voice for the voiceless.”

Mr. Ban said he was greatly honoured to have an audience with the newly elected Pope, and said that His Holiness’ choice of name – after Saint Francis of Assisi – was a powerful message for the many goals and principles shared by the United Nations.

“It speaks loudly of his commitment to the poor, his deep sense of humility, his passion and compassion to improve the human condition,” Mr. Ban said. “I was especially privileged to meet Pope Francis as we mark 1,000 days to the deadline for the Millennium Development Goals.”

Over the weekend, Mr. Ban launched the campaign, “MDG Momentum – 1,000 Days of Action” and called on governments, international organizations and civil society groups to work with the UN and its partners to achieve greater gains by the 2015 target date.

Mr. Ban also said he was heartened by the commitment of Pope Francis to build interfaith dialogue and by his outreach to Muslim and Jewish communities to deepen understanding and promote tolerance, inclusion and peace.

“I look forward to continuing our conversation. In that spirit, and following in the tradition of his predecessors, I was honoured to invite Pope Francis to visit the United Nations at his earliest convenience,” Mr. Ban added.

During his visit, Mr. Ban met with Prime Minister Mario Monti, with whom he exchanged views on the worsening situation in Syria, Mali and the wider Sahel region, and Italian President Giorgio Napolitano, to whom he expressed appreciation for Italy’s support to the UN, including through its contributions to the peacekeeping efforts. 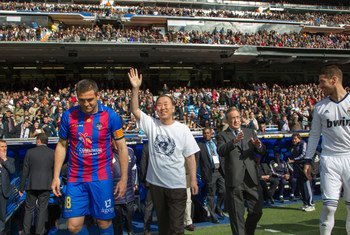 6 April 2013
Sporting a white jersey with the number 1,000 on his back, Secretary-General Ban Ki-moon today kicked off the Real Madrid-Levante match at the Santiago Bernanéu stadium in the Spanish capital of Madrid.