UNICEFCAR/2013/Dede Mambeanre
Emergency supplies sent by UNICEF to the Central African Republic being unloaded in the capital Bangui.

9 April 2013
More than two weeks after armed rebels seized power, the political and security situation in the Central African Republic continues to be “highly volatile,” a United Nations envoy said today, stressing the need to restore the rule of law in the country.

“The return to legality is extremely critical,” the Special Representative of the Secretary-General and Head of the UN Integrated Peacebuilding Office in the Central African Republic (BINUCA) Margaret Vogt told reporters in New York via teleconference after briefing the Security Council.

Ms. Vogt warned that humanitarian access remains limited, looting is still pervasive, and children are being recruited by armed forces.

“The security situation continues to be very delicate and fragile,” she said. “We are particularly concerned by reports that some children that we had separated from armed groups and had been reunited with their families are now being re-recruited.”

Ms. Vogt emphasized that following the Libreville Agreements are essential to restore legality in the country. The Agreements were signed on 11 of January in Gabon, and call for the establishment of National Transitional Council that would elect a transitional Government.

In particular, Ms. Vogt stressed that the Libreville Agreements allow for an inclusive and consensus-based system that would take into account the current situation on the ground.

The National Transitional Council must be structured in a way that is inclusive and that members have the freedom to express themselves,” she added.

Meanwhile, UNICEF today said it had flown in more than 23 tonnes of essential medical supplies and water tanks were delivered by the United Nations Children’s Fund to assist some 200,000 people.

“This delivery represents a vital step in enabling children and the population at large to regain basic access to medical care,” said Souleymane Diabaté, UNICEF’s Representative in the CAR, where the aid was delivered Monday. “However, this is only the tip of the iceberg in terms of needs. So much has been lost in the looting in a country where children already face some of the most difficult survival conditions in the world.”

Emergency medical kits will be used to treat about 200,000 people affected by the conflict for the next three months. The water tanks will secure water provision at the main hospitals and health centres in the capital, Bangui, and other areas.

UNICEF now estimates that the entire population of the Central African Republic, about 4.6 million people including over 2.3 million children, is directly affected by the conflict due to the collapse of services and law and order. UN agencies and non-governmental organizations (NGOs) operating in the country were also affected as they had their offices, vehicles and warehouses looted.

The aid flown in is one of the most significant deliveries of relief supplies to the CAR following recent weeks of insecurity and looting in which hospitals and health facilities incurred serious losses of medical supplies, equipment and furnishings.

“The supplies will be selectively distributed to health partners who have the capacity to undertake care and treatment of those most in need starting with main hospitals and health facilities,” Mr. Diabaté said. “The new Government has pledged its cooperation with these efforts.”

Since the coup d’etat, UNICEF has delivered 81 tonnes of emergency supplies to partners, and specifically essential drugs and medical equipment for over 60,000 people to health partners operating at hospitals and health centres.

The World Health Organization (WHO) has also provided technical support to the CAR ministry of health to set up a crisis unit that can coordinate emergency responses, provide medicines and emergency surgical supplies, since most facilities have been looted. WHO is also supporting the provision of basic health services through NGO partners in healthcare facilities in accessible areas. 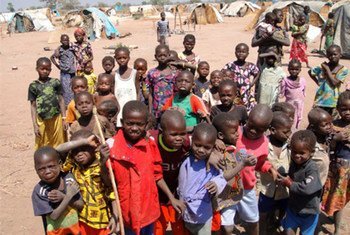 29 March 2013
Two million children in the Central African Republic are without basic social services and are exposed to violence following a power grab by the Séléka rebel coalition and subsequent insecurity and looting, the United Nations Children's Fund (UNICEF) today said, warning that more children will be at risk if the country does not stabilize quickly.