9 April 2013
A new initiative unveiled today at the United Nations Forum on Forests will provide clear and timely information that makes it easier for governments, companies and communities to fight deforestation.

It was developed by the World Resources Institute and a number of partners – including Google, the University of Maryland and the UN Environment Programme (UNEP) – and was previewed for participants at the Forum’s current session in Istanbul, Turkey.

“The Global Forest Watch 2.0, that will be launched next month, could not come at a more critical moment,” Under-Secretary-General for Economic and Social Affairs Wu Hongbo said at the event.

“In achieving sustainable forest management, reliable, up-to-date and easily accessible data and information are essential to monitoring, assessment and effective interventions,” he said.

“For policy to be based on science and the facts, data and information must be widely and easily accessible. It must also be in formats usable for decision-making and in public domains,” said Mr. Wu. “Global Forest Watch 2.0 will help achieve that objective.”

Introducing the new tool, Nigel Sizer, Director, Global Forests Initiative, World Resources Institute, pointed out that many countries have made tremendous progress in improving the quality of information gathered about forests and making it accessible.

One example is Brazil, with its near real-time forests monitoring systems that have greatly enhanced its enforcement efforts.

“Deforestation rates in the Brazilian Amazon have dropped by 80 per cent since 2004,” Mr. Sizer said. “According to senior Brazilian officials, this is in part due to their efforts to improve the quality and availability of information about what is happening to those forests and to make it rapidly available to those who can take action.”

Another example is Gabon, which is investing millions of dollars in improving access across the region to satellite imagery and remote sensing for a new infrastructure programme that is being developed on the ground.

“But we need to do much better,” Mr. Sizer stressed, adding that managers and those responsible for forests in many countries still lack access to timely information on what is happening to their forests. This is problem in both developing and developed countries.

There are a number of problems in this area, including the fact that information is not up to date; it is very expensive to gather information; and the information-gathering process is very technical.

“Individual countries are spending millions of dollars on gathering and trying to analyze satellite data rather than spending that money on taking action to address the issues that information presents,” said Mr. Sizer.

According to the World Resources Institute, the new initiative has been made possible thanks to a convergence of technologies and human networks, including advances in satellite and remote sensing technology.

Meanwhile, high-speed internet connectivity enables sending data and forest maps processed in North America, Europe or Singapore to laptops and mobile phones in Jakarta, Kinshasa, Lima, Vladivostok, and other corners of the globe. Also, smartphones, which are more and more common, can be used by anyone in the field to download maps and satellite images, as well as upload GPS coordinates and photographs from the ground.

In addition, crowdsourcing using simple web interfaces can empower large numbers of people to gather and share information, participate in forest monitoring, and hold decision-makers accountable. Added to this are social media outlets which can spread information quickly, help communities organize, and mobilize people to act. 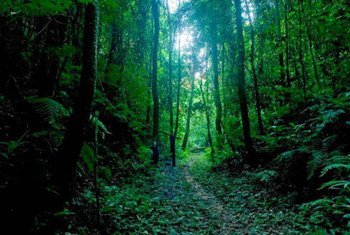 26 July 2012
Ten Central African countries will take part in a United Nations-backed initiative that will help them set up national forest monitoring systems and strengthen cooperation among nations in the region, it was announced today.