UNHCR/D. Telemans
A person being inteviewed which is an essential part of the stateless determination process.
9 April 2013

The United Nations refugee agency today welcomed a new determination procedure in the United Kingdom to end legal limbo for stateless people and legalize their presence there.

The United Nations refugee agency today welcomed a new determination procedure in the United Kingdom to end legal limbo for stateless people and legalize their presence there.

“It is a landmark step,” the Chief Spokesperson for the Office of the UN High Commissioner for Refugees (UNHCR), Melissa Fleming, told journalists in Geneva.

The procedure, which came into effect on 6 April, allows stateless people “a route to be formally recognised as stateless persons and to legalize their presence in the UK,” Ms. Fleming added.

Around 150 to 200 people each year claim asylum and are recorded as being stateless by the UK Home Office, according to 2011 figures.

The new UK policy was created with input from UNHCR, Ms. Fleming said. Introduction and implementation of a fair and efficient procedure to identify stateless people in the UK was one of the key recommendations of a 2011 study carried out by UNHCR and partnering non-governmental organization, Asylum Aid.

A key feature of the new procedure is that it assesses if an individual has a nationality elsewhere or if they require protection in the UK.

Many stateless people once had a nationality but lost it when the countries they were citizens of ceased to exist, while some have been arbitrarily stripped of their nationality. Others have been without citizenship since birth – for example, in countries where flawed nationality laws mean women are not allowed to pass on nationality to their children, UNHCR has said.

“The new procedure is also a positive example to other countries that are parties to the 1954 Convention Relating to the Status of Stateless Persons but which have not taken steps to implement the Convention,” Ms. Fleming said.

♦ Receive daily updates directly in your inbox - Subscribe here to a topic.
♦ Download the UN News app for your iOS or Android devices.
Stateless 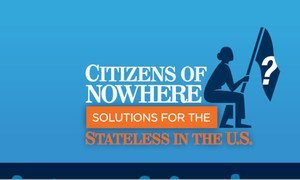 The United Nations refugee agency and a global non-governmental organisation are jointly appealing to the United States Government to take further action to end the hardships facing stateless people in the North American country.