8 April 2013
The top United Nations official in South Sudan today urged authorities and communities in Jonglei state to take all necessary steps to prevent inter-communal violence and attacks by armed groups which are threatening civilians and spurring a deadly cycle of violence.

The top United Nations official in South Sudan today urged authorities and communities in Jonglei state to take all necessary steps to prevent inter-communal violence and attacks by armed groups which are threatening civilians and spurring a deadly cycle of violence.

“The destabilization of Jonglei must stop. I urge the Murle, Lou Nuer and Dinka communities, their leaders, and the Governments of Jonglei and South Sudan to resume – and sincerely engage in – peace initiatives,” Special Representative of the Secretary-General Hilde F. Johnson told journalists in Juba, adding that that UN Mission in South Sudan (UNMISS), which she heads, would continue to support these peace processes.

She specifically noted the importance for the Sudan People’s Liberation Army (SPLA) to make every effort to abide by national and international humanitarian and human rights law to protect civilians.

“Women, children and the elderly are particularly vulnerable and need protection,” she said.

Ms. Johnson also called on people from “all the communities in the state to come together” to end the cycle of violence.

“Your diversity is what constitutes the make-up of your country; it is what makes South Sudan great. It should be the glue that holds you together, not a force of division,” she continued, warning against reports of retaliatory attacks by armed youth.

South Sudan faces considerable security challenges, in particular, in Jonglei State and the tri-state area of Lakes, Warrap and Unity.

Last week, the UN mission released its findings into a probe of a cattle raid on 8 February attack near Walgak in West Akobo in which at least at least 85 cattle herders, mostly women and children, were killed.

UNMISS said the attack represented the highest single loss of life since an increase in inter-communal violence began several months ago.

As part of its protection of civilians mandate, the Mission increased its military deployment in all communities in Jonglei, including in Bor, Pibor, Gumuruk, Akobo and Yuai, with UNMISS troops conducting expanded patrols to deter violence and assist with early warning in relation to threats against civilians, according to a news release.

Additional forces are on stand-by for rapid deployment to Jonglei when necessary, including in integrated teams to engage in early warning and monitoring activities, the Mission noted.

“The Mission will also follow up on any reports of hostilities affecting civilians adversely or violations of human rights, and calls on the Government of South Sudan to investigate such incidents and hold the perpetrators to account,” UNMISS said, urging all parties to grant the Mission “freedom of movement” to carry out its mandate.

Addressing journalists today, Ms. Johnson underscored that UNMISS treats all communities with impartiality. “The UN is set to protect all civilians, wherever they come from, whatever their ethnic identity or background. There is no difference,” she said.

“We will always act with impartiality in South Sudan, in all circumstances. Anything else would be a gross violation of our UN-mandate,” she stressed.

She urged communities to relay information to UNMISS and the Government authorities, saying “UNMISS needs ‘early enough’ early warning to deploy as quickly as possible within the Mission’s existing logistical capacity.” 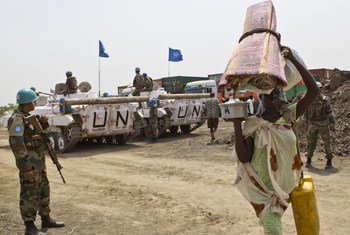 5 April 2013
The Government of South Sudan must do more to protect communities at risk for attacks and bring the guilty to justice, the UN peacekeeping mission in the country today said releasing its findings from an into the killing of at least 85 cattle herders in Jonglei state.