On anniversary, Ban honours victims and survivors of Rwanda genocide

Racial or ethnic discrimination has been used to instill fear or hatred of others, often leading to conflict and war, as in the case of the Rwanda genocide in 1994. UN/J. Isaac

On anniversary, Ban honours victims and survivors of Rwanda genocide

7 April 2013
Secretary-General Ban Ki-moon today honoured the memory of the more than 800,000 people who lost their lives during the Rwandan genocide in 1994, and stressed countries have a 'shared responsibility' to prevent mass atrocities from happening again.

“Preventing genocide is a shared responsibility. States must uphold their obligations under international law to prevent abuses and protect their populations,” Mr. Ban said in his message marking the International Day of Reflection on the Genocide in Rwanda, observed on 7 April.

“Collectively, we must go beyond words and effectively safeguard people at risk. And individually, we must nurture the courage to care – and the resolve to act. Only by meeting these challenges can we match the resolve of the survivors and truly honour the memory of those who died in Rwanda 19 years ago,” Mr. Ban said.

Nearly one million Rwandans, mostly ethnic Tutsi, were massacred by Hutu militia and government forces over a period of just 100 days. This occurred despite the existence of the Genocide Convention of 1948, which makes it a crime to commit genocide. In response to this collective failure and in an effort to learn from the past, the United Nations outlined an action plan for the prevention of genocide in 2004.

“Out of the ashes of the genocide, Rwanda has forged a new path, progressing towards a more peaceful and just society,” Mr. Ban said. “I encourage the people and Government of Rwanda to continue promoting the inclusive spirit and dialogue necessary for healing, reconciliation and reconstruction.”

Mr. Ban stressed that since the Rwandan genocide, the United Nations has worked every day to prevent a recurrence of such horror, with the Responsibility to Protect having become a global principle.

“We are strengthening our capacities for mediation, fact-finding, preventive diplomacy and the peaceful settlement of disputes. And we are focusing on the special procedures and other UN human rights mechanisms, which play a critical early warning role.”

“International criminal justice is a testament to our collective determination to confront the most heinous crimes. The new age of accountability is real,” Mr. Ban added. 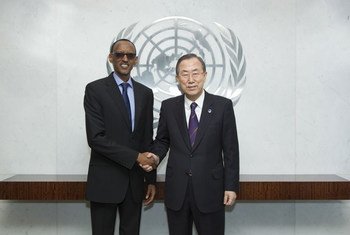 20 March 2013
Secretary-General Ban Ki-moon and Rwandan President Paul Kagame met today to discuss the newly signed United Nations-backed accord aimed at stabilizing the Democratic Republic of the Congo in the context of bringing peace to the Great Lakes region.