UN Photo
Secretary-General Ban Ki-moon waves at the crowd before kicking off the Real Madrid/Levante match in Madrid, Spain.
6 April 2013

Sporting a white jersey with the number 1,000 on his back, Secretary-General Ban Ki-moon today kicked off the Real Madrid-Levante match at the Santiago Bernanéu stadium in the Spanish capital of Madrid.

Sporting a white jersey with the number 1,000 on his back, Secretary-General Ban Ki-moon today kicked off the Real Madrid-Levante match at the Santiago Bernanéu stadium in the Spanish capital of Madrid.

Mr. Ban was all smiles as he performed the ceremonial kick-off on the 30th day of the Spanish La Liga.

The 1,000 number on his back represents the number of days remaining to take action before the deadline of the anti-poverty targets known as the Millennium Development Goals (MDGs).

"I've watched Real Madrid matches for years and its one of the best teams in the world," Mr. Ban said in an interview. "I particularly like Casillas, who is a good United Nations ambassador for the Millennium Development Goals."

With today's kick-off Mr. Ban sought to raise awareness not just of the importance of achieving the MDGs, but also of the role that sports can play in tackling poverty, as well as promoting education, health, development and peace.

Yesterday, Mr. Ban launched the campaign, “MDG Momentum – 1,000 Days of Action” and called on governments, international organizations and civil society groups to work with the UN and its partners to achieve greater gains by the 2015 target date.

“The MDGs are the most successful global anti-poverty push in history,” Mr. Ban said. “[They] have helped set global and national priorities, mobilize action, and achieve remarkable results.”

According to UN figures, since the MDGs were adopted by all UN Member States in 2000, global extreme poverty rate has been cut in half and two billion more people have gained access to safe drinking water. In addition, according to those figures, maternal and child mortality have dropped. The world continues to fight killer diseases, such as malaria, tuberculosis and AIDS.

Following his visit to Madrid, Mr. Ban will travel to The Hague, Netherlands. He then heads to the Vatican City in a trip announced today by his spokespeople. Mr. Ban will meet Pope Francis on 9 April to discuss the continuing cooperation between the United Nations and the Holy See. 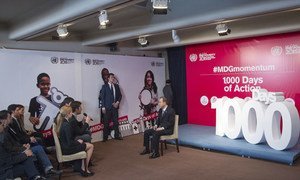