The Government of South Sudan must do more to protect communities at risk for attacks and bring the guilty to justice, the UN peacekeeping mission in the country today said releasing its findings from an into the killing of at least 85 cattle herders in Jonglei state.

“It is of utmost importance that the Government continues to call for restraint and engages with all communities to prevent a further escalation of violence,” the UN Mission in South Sudan (UNMISS) said in a news release about the human rights report, which also urged greater cooperation between the UN Mission and the Government.

The Mission also voiced its concern about potential revenge attacks following the 8 February attack near Walgak in West Akobo.

In order to create a “strong deterrent” to further criminal activity the Mission said it was “crucial that an investigation takes place with a view to bringing the perpetrators to justice and seeking redress through compensation.”

The Walgak attack represents the highest single loss of life since an increase in inter-communal violence began several months ago,” UNMISS reported.

UN Human Rights Officers reported that the majority of those killed were women and children. Given the difficulty accessing the area, 34 additional people are reported missing.

“It is of grave concern that so many people were killed in such a brutal attack,” said the Mission’s Human Rights Director, Richard Bennett.

In the report, UNMISS determined that the causes of the attack ranged from widespread availability of weapons and insecurity to marginalization and lack of development.

The Mission also blamed the “criminal incident of violence in deep-rooted inter-community relations, particularly between the Lou Nuer and Murle communities of Jonglei.”

The Special Representative of the Secretary-General for South Sudan, Hilde F. Johnson, met with people wounded during the attack and other community members in Walgak. She urged government and community leaders to work towards greater unity in their communities.

According to the UN investigation, a group of pastoralists, mainly innocent women and children from the Lou Nuer community, were attacked by a group of armed men, allegedly members of the Murle community, while taking cattle on their annual migration to a grazing area on 8 February.

They were escorted by a platoon of approximately 40 national soldiers from the Sudan People's Liberation Army (SPLA), who were meant to provide security and deter cattle-rustlers.

“The attack is assessed to have lasted several hours and involved both indiscriminate and targeted fire by the assailants against civilians as well as the SPLA who were eventually overwhelmed and suffered casualties,” UNMISS reported. 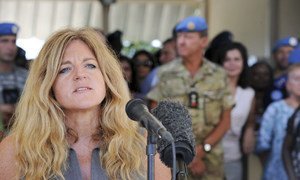 The top United Nations official in South Sudan is urging the communities in the eastern state of Jonglei to break the cycle of violence, following a “very serious” attack and cattle raid, while UN and local officials are poised to distribute humanitarian aid to thousands of people affected by the fighting.